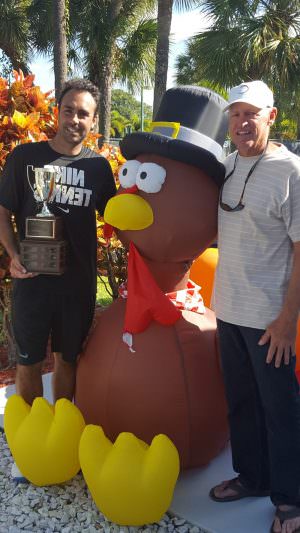 THE DIRECTOR & THE STAR: Tournament director Keith Dunlop (r.) and men’s open winner Eric Prodon sandwich the turkey that is the event’s mascot.

For the 31st consecutive year, tennis fans in Broward and South Palm Beach counties had a chance to watch some high-level tennis at the Turkey Bowl tournament.

The five-day event, held during the Thanksgiving holiday, took place at the Swim and Racquet Center in Boca Raton. A member of the club myself, I was inspired by watching some top players competing in singles and doubles matches at courts right next to mine. (Note to self: If I was playing tennis at the 4.0 level, what were these athletes playing? Or better yet, if they were playing tennis, what game was I attempting to play?)

The annual competition, sponsored by Digestive Care of Boca Raton, earns winners USTA points at the designated tournament level. Tournament directors Keith Dunlop and Steve Sheer have been running this much-enjoyed event for 11 years. Keith, a teaching pro and tennis director at Valencia Reserve in Boynton Beach, said that the event is unique because its eclectic mix of “juniors, ex-pros, college players, and current pros is nothing like any other tournament.”

The event has drawn the likes of young teens like Andy Roddick, Gael Monfils, and Carling Bassett-Seguso. South Floridian Vince Spadea is a former winner. Two years ago, then 13-year-old Felix Auger-Aliassime beat the No. 1 player from the University of Oklahoma, Keith remembers. This year, Felix, now 15, won the juniors division at the US Open and was a finalist at Wimbledon. 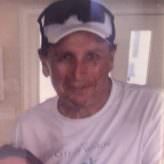 LENDL ME A HAND: Brad Lilienthal, who played against an opponent who practiced with Ivan Lendl.

So it’s no surprise that Brad Lilienthal, a 4.0 player who I play with regularly and who played in the men’s 45+ doubles with a similarly-ranked Steve Becker, found himself counting the points rather than the games that he and Steve managed to win, when they were soundly beaten 1-6 and 0-6 by a pair of powerful pros.

“I can now say that I’ve played against a guy who practiced with Ivan Lendl,” Brad quipped.

Some 140 players from local haunts joined those who were born in such faraway places as Russia, France, Turkey, Argentina, Spain, Haiti, and Canada, among other lands, to take home a trophy and some cash. Men’s singles featured the following categories: open, 35+, 45+ and 55+, while the women’s singles was limited to the open division. As for men’s doubles, there was an open level, as well as a 45+.

Eric Prodon walked away with a check for $600 for winning the men’s open final against Eric Hechtman, who pocketed $300. (Note to self: Ask the tournament directors if next year there’ll be a category just for Erics.) Theo Dienes was victorious in 35+ men’s singles over Hillel Harris, Jordan Klingsberg beat Man Le in the 45+, and Mirek Wierzbicki beat Leon DeLeon. On the women’s side, Csilla Fodor took home $200, twice the amount of her finals opponent, Stephanie Nemtsova. 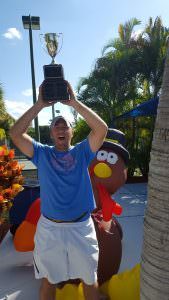 CAN YOU SAY JOY?: Theo Dienes shows his excitement after winning the 35+ singles. 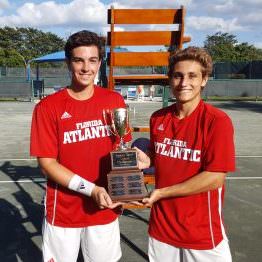 DOUBLE THE PLEASURE: The men’s open doubles winners share their joy. At left is Anthony Schohn with Alexander Gitlin.

Men’s doubles champs in the open division — Anthony Schohn and Alexander Gitlin — split a $400 purse, twice what their finals opponents — Eric Hechtman and Andre Libnic — divvied up between themselves. In the 45+ category, Decio Raven and Bruce Kurtz prevailed over Mike Aronson and Brian Powell.

Mens’ and womens’ consolation winners — those who prevailed in a back draw of entrants who all lost in the first round — were gifted free entry for the 2017 tournament when the 32nd annual event begins the day before Thanksgiving next year, something I’m sure they’re thankful for.