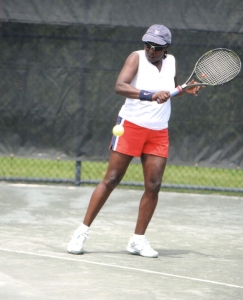 Lou Armstrong on the court.

If you’re going to have a cardiac event on the tennis court, it’s a great idea to have a doctor one court away, an ER nurse on another, and a heart attack survivor nearby.

Lou Armstrong, co-local league coordinator from Broward County, was fortunate to have such a select group as tennis neighbors when the unimaginable happened.

The retired former multimedia director for the Sun Sentinel was playing a women’s doubles match for her team from Deerfield Beach’s Deer Creek at the Seasons Country Club in Boca Raton. She and her teammate had won the first set, despite the chest pains Lou had been experiencing for a few days.

“It was like a fist was being pressed into my chest,” she recalls. She headed to the canopy to rest after that set, and then suddenly passed out briefly.

On the adjacent court playing for the opponents was Susie Brenner, who, when she’s not wearing tennis whites, happens to wear medical whites. The MD quickly examined Lou, and determined that she needed some aspirin immediately to help prevent a possible cardiac incident. One of her opponents, whose husband is a heart attack survivor and was playing on a nearby court, called him on her cell phone to get aspirin right away, which he promptly provided.

Dr. Brenner insisted that Lou stop playing and get to a hospital emergency room pronto. So, too, did a teammate playing on the next court, who happens to be an ER nurse. Lou acted promptly. 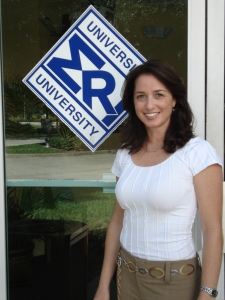 LIFE SAVER: Fortunately, there was a doctor in the house — or the next court. Here’s Dr. Susie LeBlang-Brenner, tennis player and life saver.

While under ER care in the hospital, she passed out again, this time from a heart attack. And when she awoke, there was a stent in her chest to help alleviate arterial blockage. She remained in the hospital for four days — and was back on the tennis court two months later.

Hindsight being 20/20 on both the tennis court and life, Lou realized that she had been playing seven days in a row, and had been dehydrated — despite drinking water — because of a severe dietary deficiency of both potassium and magnesium. This caused her heart to work extra hard.

Morals of the story: