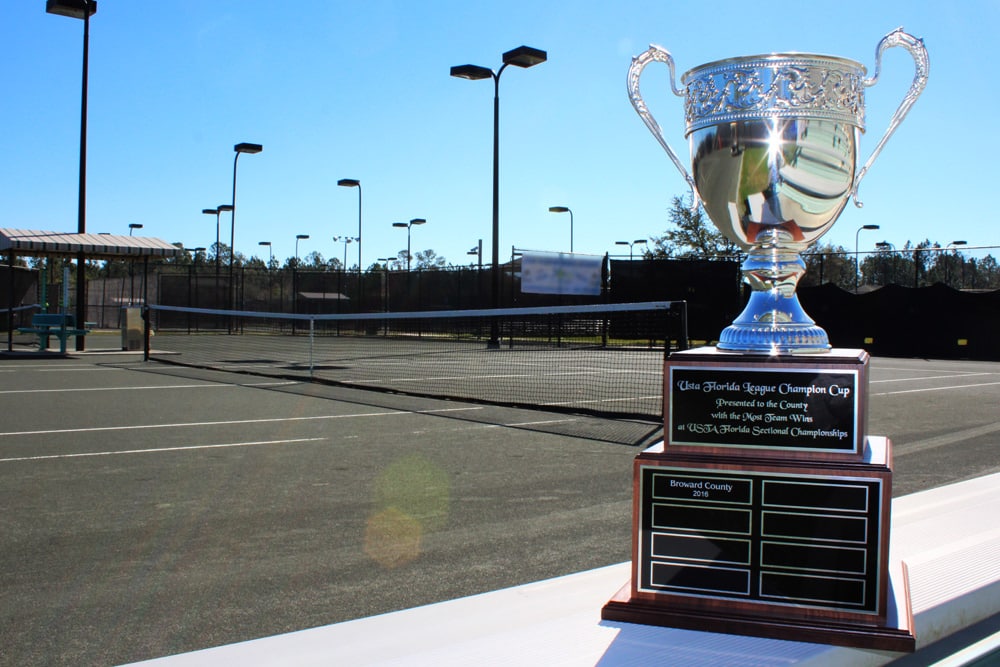 The USTA Florida League Championship Cup, presented to the Florida county with the most adult league sectional (state) championships during the season, has been claimed by Broward County for the 2016 season.

Broward finished first in the Cup race in dramatic fashion, winning the Women’s 9.5 division title at the final USTA Florida League sectionals championship of the year, the USTA Florida Combo 18 & Over 5.5/7.5/9.5 League Sectionals held Jan. 13-15, 2017 at the USTA National Campus in Orlando. It was Broward County’s sixth sectionals title of the season, breaking a tie with Pinellas County entering the final sectionals event. 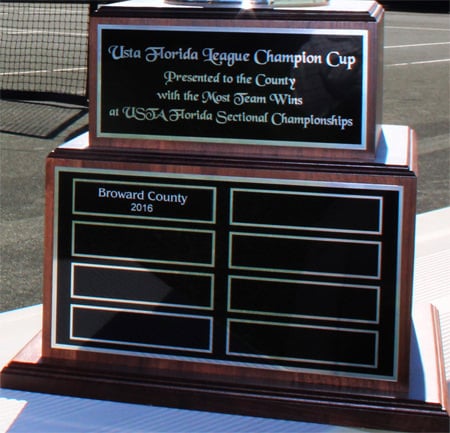 This is the first season that the United States Tennis Association-Florida Section (USTA Florida) has awarded the USTA Florida League Championship Cup.

“We’re proud of being the first county to win this trophy and having one of our captains be the first winner to sign the captain’s wall at the USTA National Campus in Lake Nona. Go Broward!” said USTA Florida Local League Coordinator for the Broward area Maria Miro. “Congratulations to all the Broward County sectional champions. We always had the support of the local tennis clubs and directors and our local USTA League captains are the best. Each year most return, which gives us an extremely low captain turnover, which has helped build team camaraderie and dedication and a competitive edge.”

Finishing second in the standings were Orange and Pinellas counties tied with five titles, and tied with four titles were Clay, Collier, Miami-Dade and Volusia counties.

“We want to celebrate the tennis communities that are participating and competing successfully in our leagues program,” says USTA Florida Director of Leagues Christine Ducey. “Broward found the recipe for success at the 2016 events, and their encouragement, dedication, and support of the USTA Leagues program created this opportunity for their players. Congratulations also to second-place Orange County and Pinellas County, as the competition came down to the wire. The USTA Florida League Championship Cup recognizes the team effort of the tennis communities, public facilities, clubs, and teaching professionals involved throughout the state, and the cooperation required by these groups in order for the USTA Leagues program to be successful.”

With Ft. Lauderdale as its county seat, Broward County is part of the Miami metro area, the second-most populous county in Florida, and a robust tennis community. In addition to a number of renowned tennis clubs and facilities, Broward County is the former host of a red clay ATP World Tour event held in Coral Springs, a WTA tour event in Ft. Lauderdale, and is the future home of the American Tennis Association’s headquarters and national training center.

The USTA Florida League Championship Cup will be presented to the winning teams and players at a ceremony TBD in February in Broward County. Each team will then receive the Cup for one week for display at their club, after which the Cup will be displayed at the USTA Florida headquarters.

USTA League is the world’s largest recreational tennis league. Nationwide there were more than 904,000 participants in USTA League in 2016 within the Adult 18 & Over, Adult 40 & Over, Adult 55 & Over, Mixed 18 & Over and Mixed 40 & Over divisions. The league groups players by using six National Tennis Rating Program (NTRP) levels, ranging from 2.5 (entry) to 5.0 (advanced). USTA League is open to any USTA member 18 years of age or older.

For more information on USTA Florida Leagues or to find a local league in your area, go to www.ustaflorida.com/leagues.