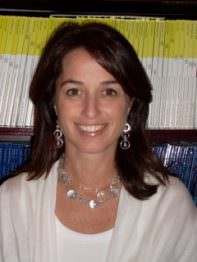 Notes from the Doctors’ Prescription Pads

Dr. Suzanne LeBlang, a radiologist at University MRI in Boca, has seen far too many heat stroke and dehydration cases. The latter, said the doctor of 20 years and tennis player of 40 (and a former University of Miami player), can give rise to nausea, dizziness, hypotension, muscle cramping, and soft-tissue injuries. For her, it’s water, water everywhere: recommending 50 percent more fluid intake the day before playing in the intense heat, and Gatorade and Powerade during play.

The elevated summer temperatures and high humidity elevate body temperatures and heart rates, she said, a potentially dangerous combination for dehydration. Overweight people have an even harder time, she noted, because excess fat is an insulator, preventing them from cooling off as easily as thinner players. 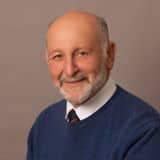 Dr. Ron Backer, a family physician of 44 years, plays tennis in Boca. A vegetarian for 27 years, he grows organic vegetables, so he presents a somewhat more holistic approach to prevention. He’s so high on adequate sleep the night before that he eschews loading up on water the day before, which periodically interrupts sleep for bladder emptying.

He also fears that over-hydration can stress the kidneys and heart. Instead, he recommends drinking a glass of quinine water or tonic water the night before playing for maximum influx of minerals in and out of muscle cells.

During play, he opts for Trader Joe’s organic low-salt tomato soup or V8, with 1/8 teaspoon of both sugar and a salt substitute like potassium chloride. On the sunscreen front, he chooses a block with 50 SPF. The doc is a big proponent of stretching after playing for 5-15 minutes to prevent the muscle cramping that can easily result from post-tennis dehydration.

On the equipment side, he recommends good sports shoes, perhaps even changing them every three months, to prevent falls and possible injuries. He also sees value in polarized sports sunglasses that protect eyes better: The MD has seen more cataracts among younger people in South Florida than one would expect.

From a nutritional standpoint, he chooses 300-400 milligrams of magnesium for the day of play unless a person has kidney or cardiac conditions. But he cautions that any of these summer preparations should be checked with your own physician, who knows your medical history.

Notes from the Players


Carol Heller, who plays for the Swim & Racquet Center in Boca Raton in the South Palm Beach Adult 18 & Over 4.0 women’s league, is long on wearing long sleeves in the summer to protect her skin. She also drinks more water and applies sunscreen, something she doesn’t do during winter months.

Beverly Feurring, a teammate, dons BloqUV sun protective tops and skirts. She finds the fabric cool, both in lightness of weight and fashion. 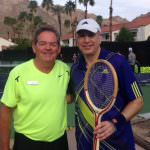 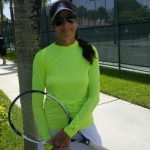 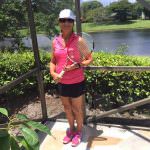 CAROLING: When it’s as hot as Heller, Carol knows how to keep cool.

The beverage for Bev is a dilution of water with Gatorade’s G2 electrolyte drink, which sports less than half the calories and carbs of regular Gatorade. Her formula: 3-to-1 H2O/G2. When she plays at her Woodfield Country Club home courts, she avails herself of their ice-cold towels during changeovers.

Adam Ross, who plays 4.5 men’s doubles at Frank Veltri Tennis Center in Plantation and at the Sunrise Tennis Club in Sunrise, has his own prescription to beat the heat so that the heat doesn’t beat him. It did once, forcing him to stop playing because he felt disoriented.

“You’ve got to pay attention to your body,” says the lawyer and USTA Florida volunteer. “Working behind a desk for five days a week, and then becoming a weekend warrior in extreme heat is not exactly the best training for such intense challenges to the body.”

Adam plays early in the day (8 a.m.), and wears light colors to deflect the heat. He also wears dri-fit tennis clothes, and brings an extra pair of everything, including socks.

Like Bev, he’s big on G2, before, during, and after play. He’ll drink a pint of G2 en route to the courts, and stores the rest in a cooler kept cold with ice packs for changeovers, when he also sips Hammer Gel for rapid energy.

Notes from the USTA 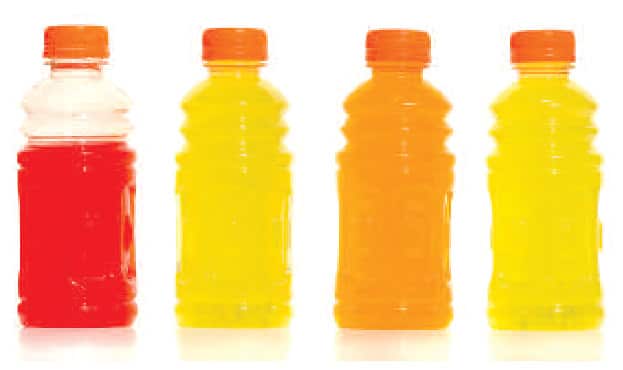 The USTA recently made national all-year-round recommendations regarding hydration on the advice of a panel including a doctor and sports scientists. They suggest drinking 16-20 ounces of water or an electrolyte sports drink for two hours before play, 4-8 ounces during play for those who perspire in a light to medium manner (8-16 ounces for those who sweat more profusely), and 20 ounces, along with some protein, within two hours of completing play.

If your tennis outing lasts more than an hour, they prefer the electrolyte beverage over water. For hot summer play in south Florida, additional hydration would be required.