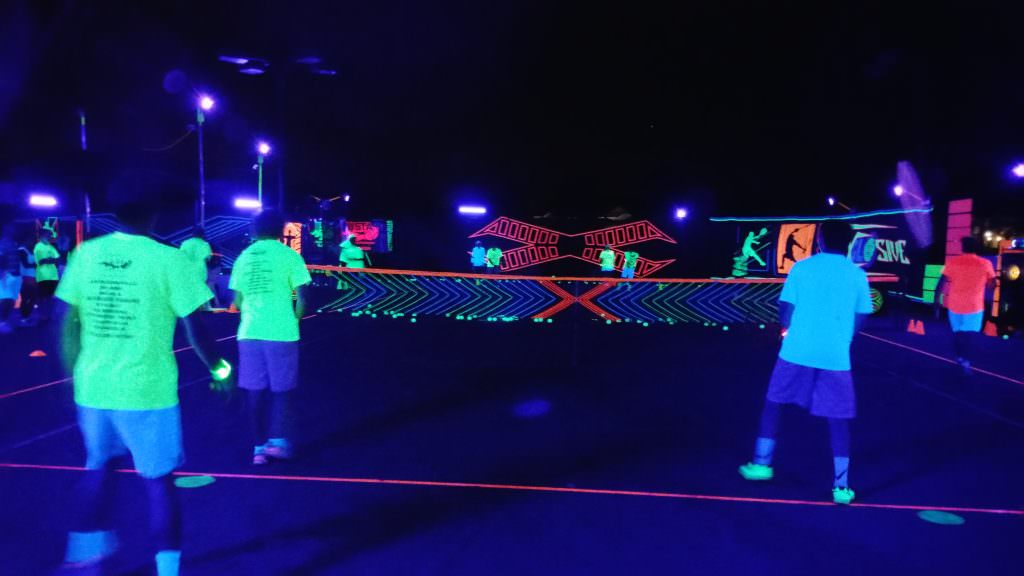 NO LIGHTS, NO CAMERA, BUT PLENTY OF ACTION: Glow in the dark tennis in Miami courtesy of XGLOsive

It will literally be lights out in South Florida as the popular new XGLOsive Tennis is on a 10-city tour, and comes to the Lighthouse Point Tennis Center on April 23 for a fun-filled, black-light tennis evening that’s sweeping the state.

The 1-1/2 hour April event, set for an 8 p.m. start time, follows on the heels of a March 5 event that was held in Miami at Ron Ehmann Park.

Hugely Successful Miami Program
This first event produced at Ehmann by the Friends of Miami Tennis, which recently took over the management of the club, drew a whopping 116 people. Three courts were set up for kids at 7 p.m., with a big turnout from the Junior Team Tennis leagues; the middle court featured a mini-net for the very young. At 8:30 p.m., adults came out, and the inner child in each of the grown-ups came out, as well.

The night was so successful, said Cathy Nordlund, USTA Florida’s tennis program coordinator for South Miami-Dade and Monroe counties, that the mantra she kept hearing all night from so many people was, “When are you going to do this again?” Word has it that the Friends of Miami Tennis is considering bringing XGLOsive back annually. 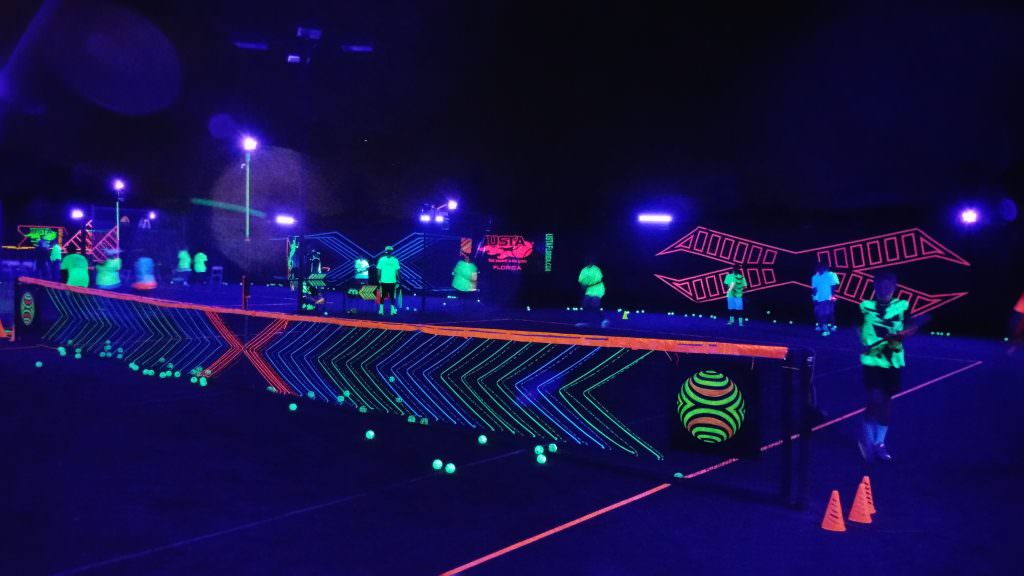 BLACK LIGHTS IN THE BIG CITY: Miami tennis never looked like this before

Summing up the night, Cathy added: “This is a one-of-a-kind event. It’s hard to put into words how great it is — fun, fast, and exciting for the whole family are the ones that immediately come to mind.”

A t-shirt memento for each participant accompanied the many memories that still linger.

USTA Florida did a joint venture with Ehmann, as it’s doing with Lighthouse Point, and all other Florida tennis facilities for the 10-city tour.

“These events are ideal for all levels and ages of players to break away from conventional play and enjoy socially, competitive, and fun play in the black-light environment,” says USTA Florida Marketing and Membership Director Laura Bowen. “This will provide facilities across the state with a unique tennis experience to help build tennis programs and generate revenue.”

Lighting Up Lighthouse Point
As of April 13, 43 people had signed up for the Lighthouse Point event, according to pro shop manager Faith Olmstead.  The cost for the unforgettable night is $30.

Having participated in XGLOsive’s November extravaganza at the USTA Florida annual meeting at the Grand Cypress Resort in Orlando, I can say from experience that they provided one of the most enjoyable times I’ve ever spent on a tennis court. Part ‘60s black light, part tennis drilling and hitting, and full-time laughs and fun, the event figures to grow to other tennis centers in the coming months.

XGLOsive Start
XGLOsive was founded in 2015 by Jason Cordova, 32, an associate tennis professional at the Sanlando Tennis Complex in Altamonte Springs, in collaboration with his father Michael. Dad handles all the electrical and mechanical matters, while son handles the design. Certified in a number of disciplines, such as cardio tennis and TRX Cardio tennis, the USPTR pro was the No. 1 ranked junior tennis player in Florida (ages 12-14) in singles and doubles, and No. 15 nationally that same year.

After a year-and-a-half of training in school to be a firefighter paramedic, as well as an EMT, and not being able to find a job, Jason was at a career crossroads: to continue looking for work, or go back to tennis teaching, something he’d given up for three years. But if it was going to be back to tennis, he said, it had to be different and it had to be creative. One day, on Groupon, he bought a pair of LED gloves that light up, and used them in his cardio tennis class. They were a huge hit, and in time, a light bulb would go off in his head (probably a neon one), and XGLOsive was born.

In the three years that Jason never touched a tennis racket, he did his share of partying. And while his firefighting training never resulted in income, the combination of partying and paramedic is now paying dividends as the head of XGLOsive.

As for partying… well, there’s plenty of that in XGLOsive.