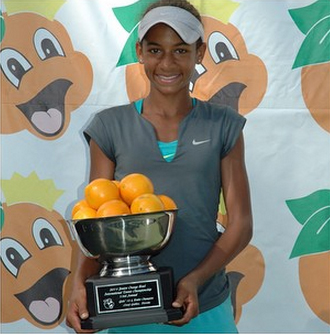 Whitney Osuigwe of Bradenton, Fla., the only American to reach a final at the 2014 Junior Orange Bowl, ousted No. 1 seed Himari Sato of Japan 6-4, 6-4 in the final for the 12s division title at the Neil Schiff Tennis Center at the University of Miami in Coral Gables, Fla.

Osuigwe trailed 3-1 in the opening set, but took charge to avenge a loss to Sato a week earlier at the Eddie Herr championships in the third round.

“I was smarter this time, knowing what to do after I had lost to her last time,” the unseeded Osuigwe told www.zootennis.com. “I knew what works and what doesn’t and I used my forehand more in hitting heavy spin balls to her backhand side.”

The 12 year old trains at the IMG Academy in Bradenton.

Osuigwe has been invited to travel with the USTA team to the Bolton Teen Tennis and Les Petits As international tournaments in January.

“It feels good, because I’ve been trying to win [the Junior Orange Bowl] for three years,” she said.

The 7th grader is rated No. 3 on the national list, and No. 1 in both Florida and the Southeast, on the Tennis Recruiting Network.