My doubles partner, Pam Cooke and I won the ITF World Doubles title yesterday in the 55+ category, beating Mary Ginnard from Fort Lauderdale and Tina Karwasky from California. It was the first time Pam had ever played in a world championship and she was amazing. She plays with a Weed racquet and at the end I swear she had at least four hands, Mary and Tina couldn’t get the ball past her. She said I hit the last ball, but I don’t even remember it, only that the ball didn’t come back over the net!

Saturday we were scheduled to play the semis against the top seeds, Susan Wright/Diane Barker of the USA at 2pm, about the time rain was forecast to set in for the day. Diane played the final starting at 10:30 against Chris French (to whom Tina and I had lost in the individuals and who had beaten Susan in the team event). The match was very long and physical, which French prevailing 7-5 in the third to win her fist world championship singles title (Diane has six).

Our doubles start was delayed till 2:30; we started the match, and the air was really heavy and the wind was picking up. We broke to start the match and I was serving 30-15 and the lightning siren went off. We immediately left the court and by the time the all clear blew at 4:30 the courts were soaked. Long story short, play was later cancelled for the day and we were to resume at 10:30 Sunday. Tina and Mary had played their semi and won 10-7 in a match tiebreak against an Aussie pair.

We warmed up early Sunday and then found out Diane was injured and couldn’t play. So we got ready for the 1pm final, and warmed up lightly again. Despite all that warm up we started slowly, down 5-1, lost the first set 64, but won the second set 63. The ITF mandates match tiebreaks in lieu of third sets and we were ready for that. Last year my doubles partner and I lost to Tina and Susan in a match tiebreak in the final of the Worlds in Turkey; this year we won it 10-7 after a couple of great points where all four of us were at the net. We were pretty excited; Pam was shaking so much she had trouble texting her husband the news!

In other action yesterday, Americans took home two singles titles in three sets; Julie Cass from Texas won the 45 singles for her second world singles title and Eoin Collins, also from Texas, won the men’s 45 singles title. Collins only entered this event to play doubles with Jeff Tarango; when Jeff pulled out Eoin went all the way in singles! Julie and Vesna McKenna from Florida had to pull out of the doubles in the final; Vesna’s mother in Argentina became quite ill and she had to fly there immediately.

Vick Buholz/Judy Newman reached the 50 doubles final and fell in a match tiebreak to the top seeds, Ros Balodis/Leeann Swaysland of Australia. The Aussies took out Fran Chandler/Sue Webb in the semis yesterday too.

Mike Tammen (Oregon)/Danny Waldman (Wash. D.C.) won the men’s 55 doubles over defending champions Mark Vines (VA) and Wesley Cash (TN). It was a repeat of last year’s final but the result was reversed.

Margaret Lumia from Florida, playing with Carlos Gomez-Diaz (playing under the Argentinian flag, but residing in Florida) fell in the 45 mixed final the #2 seeds from Argentina.

The match that had the biggest audience and most enthusiastic won pitted Ricardo Mendivil/Aldo Burga vs Mario Tabares/Carl Clark. All four players are Americans and all but Clark are Floridians. However, there was an almost Davis Cup like atmosphere since Mendivil teaches at BallenIsles and the crowd went wild when the Burga/Mendivil team won a point. The match was close, with Burga/Mendivil winning 35 64 10-7. Saturday, on the rainy day, the atmosphere was quiet and completely different, and when it rained Tabares/Clark were leading by a set and 2-2. Sunday the weather was breezier, the conditions quicker and it was very sunny. Sometimes World Championships are meant to be!

Many thanks to BallenIsles tennis director Trish Faulkner, and her staff, the grounds people, the club members and the ITF and USTA staff for putting on this tremendous event. 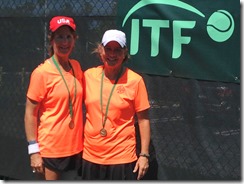 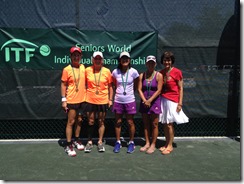