In celebration of Black History Month, throughout February USTA Florida recognizes all of those in the Black community whose talents and dedication help to grow the great game of tennis every day — at every level. We applaud them all for making tennis a better and more inclusive sport, and for making the face of our game more accurately reflect the dynamic diversity of our country. As part of our coverage, USTA Florida has provided a platform for community members to be honest and open about their thoughts and experiences.

Brothers Dwight Bailey and William Byrd are staples in the Gainesville tennis community. The PTR-certified tennis professionals have organized and hosted the Annual Heritage Tennis Classic Tennis Tournament on the weekend before Martin Luther King Jr. Day for the past 27 years. The Heritage Tennis Classic was started to continue a tradition of Black tennis that was inspired by the member cities of the Rainbow Tennis League. 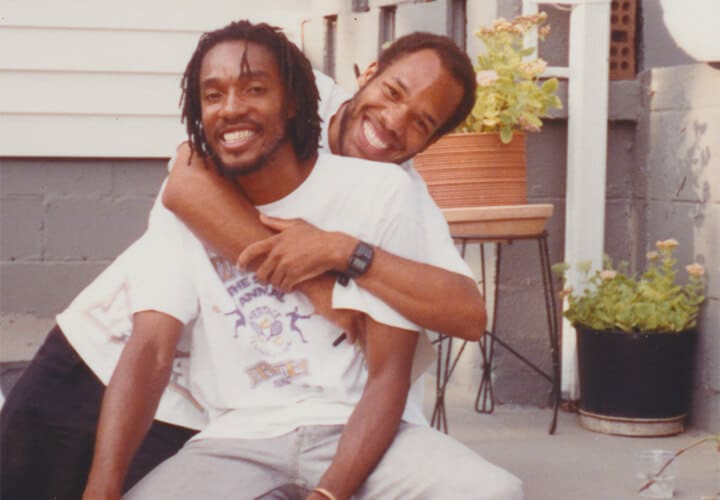 Tennis is clearly a big part of your lives. When did you both first pick up a racquet?

Dwight: I picked up a racquet when I was in high school – 10th grade – after attending free introductory lessons at Manchester Club in Mandeville, Jamaica. I immediately took interest in the game and asked my Uncle Fenton to bring me a tennis racquet on his next visit from the US. He brought an aluminum Wilson racquet. I owe my initial growth in the game to all the elders, who could be found consistently on the tennis court with balls and many different types of racquets to play with. They were encouraging, patient and generous with their time and equipment. Whenever I’m in Jamaica, I make it a point to return to the same courts I grew up playing on to get a few matches in with the elders that are there now.

William: I was first exposed to tennis in high school because my track and field and cross country coach was assigned to be the tennis coach. He required all cross country runners to be on the tennis team since no one came out for the tennis team. We were a rural community and the only sports we knew about were football, basketball and track. Needless to say, none of us had a tennis racquet or knew the rules.  By my senior year, I was the number one player on the team and the only Black person on the team.

What are some of the highlights that stand out in your tennis career?

Dwight: One of my proudest moments was when William and I coached a group of adult beginners in Gainesville – who never played the game before – to a 3rd place finish at Nationals within the year. William has been ranked No. 1 in the state of Florida for men’s 4.0 and subsequently men’s 4.5. I was ranked No. 2 in Florida’s men’s 4.5 singles in 2019. William has won Atlanta Lawn Tennis Association (ALTA) AA2, AA3, AA4 in ALTA doubles league divisions – among the most competitive doubles league divisions in the country.

How do you help grow the game of tennis in Florida?

Dwight: I am a student of the game, always working on improving my skills and pursuing my dream of being a good tennis player. I am also a USPTR certified professional – a certification I pursued in order to grow my knowledge and experience of the game and to introduce and coach new players in the game. On a regular basis, I grow the game of tennis by participating in tennis tournaments and league play wherever I can. For the past 30 years, I have traveled across the Eastern, Southern and Midwestern United States to play tennis tournaments in support of predominantly Black grassroots tennis. When I’m not playing tournaments I’m troubleshooting and working on my game, or helping others improve their game by volunteering focused lessons or practice on a specific interest.

William: I have been playing tournaments and leagues throughout the United States and Canada for the last 40 years. I have also played tournaments in the British Virgin Islands, Puerto Rico, and Aruba. My focus has always been to expose as many Black people to the tennis experience as possible by being an example of a Black person who plays a non-traditional sport.

We have grown the game in Gainesville and Florida by hosting the Heritage Tennis Classic for the last 27 years. We have participated in other leagues across Florida by hosting their annual tournaments in Gainesville and traveling to their cities to play in their tournaments. We have taught many adults and children the basics of the game. I have been a certified USPTR professional since 1999. I am a life member of the American Tennis Association (ATA) and the USTA.

You both have run the Annual Heritage Tennis Classic in Gainesville for years – what is the history behind this tournament?

Dwight: My brother William and I played tennis in North Carolina in the early 1990s and traveled to many tournaments in the Rainbow Tennis League (RTL) circuit before he moved to Gainesville to go to graduate school at the University of Florida. William wanted to expand the Rainbow Tennis League by adding Gainesville as a venue, particularly since Black tennis was not very well represented in Gainesville at the time. William decided we were going to have a tournament on every Martin Luther King (MLK) weekend and that was that… we just completed our 27th annual tournament in January 2022.

William: The Heritage Tennis Classic was started to continue a tradition of Black tennis that was inspired by the member cities of the Rainbow Tennis League. The member cities of the RTL at that time were: Jacksonville, Fla.; Atlanta, Ga.; Macon, Ga.; Tallahassee, Fla.; Chattanooga, Tenn.; Delray Beach, Fla.; Birmingham, Ala.; Daytona Beach, Fla.; and Mobile, Ala. We wanted Gainesville to be in that number and started the tournament to extend the tradition. Before each city had tournaments, we traveled to each other and played league-style matches. We changed the format to each city sponsoring a tournament and having a rotating annual tournament sponsored by one of the member cities. Even though the RTL has disbanded, most of the tournaments are still going strong. 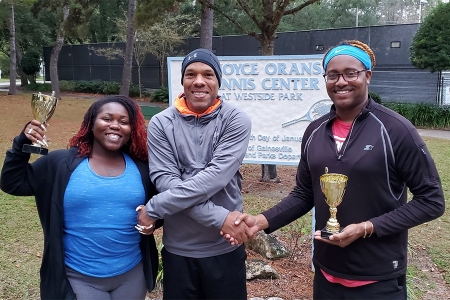 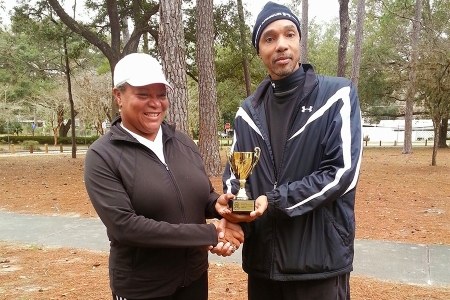 Why is the Annual Heritage Tennis Classic so important for the local community?

Dwight: Our tennis tournament is important for the local community because it was, and still is, the only minority-run, community-focused tennis tournament that embodies the MLK dream – where everyone is welcome to play together, enjoy each other’s company, engage, and leave with a renewed sense of accomplishment in the game and goodwill towards others. The tournament gives us the opportunity to host visitors and their families from out of town and out of the state of Florida. Over the years we have highlighted Gainesville hotels, cultural venues such as the Harn Museum, Gainesville’s downtown nightlife, East Gainesville restaurants such as Juniors; Caribbean Queen; and Reggae Shack, shopping at Butler Plaza and our family-oriented parks.

William: The local community benefits from the revenue generated from the players that come to the tournament every year. People come from California to New York and everywhere in between to play the HTC. They stay from Friday to Monday of the MLK weekend and fully participate in the activities of the city while they are visiting. They are living examples of what a tennis lifestyle can do for your health and well-being and role models for our children. The Heritage Tennis Classic adds diversity to a non-diverse segment of our community.

Have you ever felt less valued in a tennis-related space because of your racial background?

William: Tennis is a very unfriendly space for Black people in my tournament experience. I am usually not welcomed when I arrive like I see the white players being welcomed who check in right before me. 90% of the time when I played tournaments before I became ranked, I played the other Black person in the draw or if there were no other Black players, I played the number one seed. When the matches would be over and the socialization began, I was not invited to participate on most occasions. Luckily, I played because I loved the game and the benefits it offered for physical fitness and my health. After achieving my performance goals on the tennis court, I stopped playing USTA tournaments and found other tournament opportunities to continue to hone my tennis skills that also offered a welcoming atmosphere off the court and allowed me to feel appreciated as a person.

Dwight: Tennis in Florida generally has a blind spot when it comes to Black minorities in particular – it appears to be the heritage of the sport, and the motivation to change this is few and far between. While traveling around the state to play tournaments there are very few welcoming venues. It is also highly likely that Black players will meet each other in the first round of a draw or face the number one seed in their first match at a tournament.

Has your race ever impacted your career on and off the court?

William: Of course. I grew up in the late 60s and early 70s. I was raised by my grandparents in a rural setting. There was no diversity, only Black people and white people. The KKK presence was strong in my hometown.  For a while in the early 2000s, my hometown was the location of the KKK hall of fame and museum. My entire existence has been impacted by my race.

Dwight: I have been fortunate to have strong mentors personally and professionally and that has made a huge difference for me. The systemic issues of diversity, equity and inclusion are a broad and deep problem, therefore, a lot of work remains to be done by my generation and those to come.

What do you believe can be done to foster long-term change when it comes to racial inequality in Florida tennis? 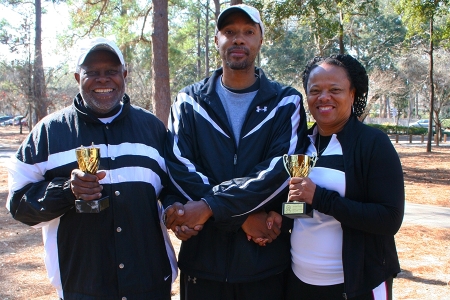 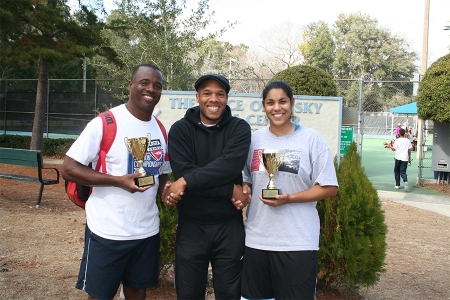 More specifically, what do you think USTA Florida could do to strengthen its relationship with minority communities?

William: The USTA must be genuine in its approach to minority communities.  It is not charity that our communities need. It is respect that we are the same as you. That is a hard ask from a privileged group that cannot share their privilege without losing it. If Billie Jean King thinks “pressure is a privilege”, what does she think about privilege itself. Words are powerful and the use of the word “privilege” should be done with discretion. She might as well have said what we all know and that is “white is a privilege” because that is what 90% of the people who get the opportunity to benefit from tennis are.

Why is it important to celebrate Black History Month in general, as well as in tennis?

Dwight: Black History Month celebrates the accomplishments and contributions of Black people in the United States. We shouldn’t need one, but because of the systemic ways in which Black people have been denigrated and had their history mangled and contorted, it’s a time in the year to raise the awareness of our nation. The month also celebrates, recognizes, and motivates Black folks and Americans, in general, to accept their rightful place in history and work to make our country better for future generations. In tennis, one’s knowledge of history, exposure, and opportunity can change lives and a community for the better.