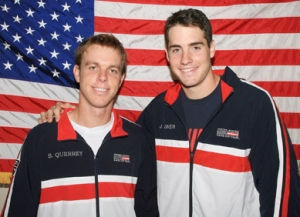 John Isner and Sam Querrey have been the U.S.’s go-to guys in Davis Cup for a number of years now, making the towering Americans the antithesis of what works best on the men’s tour nowadays.

“If you look at all the top guys and what they share in common, it’s great movement,” Gilbert says.

But it’s difficult to have explosive movement and chase down balls when you’re 6-foot-6 like Querrey or 6-foot-10 like Isner. So you do what you do best — rain down big serves and thump forehand winners.

If you’re a stats nerd, hold on to your pants, because here’s where we get down to the nitty gritty of height (Isner and Querrey) vs. speed (the Big Four).

According to the ATP’s MatchFacts (documenting matches from Jan. 1-April 27 this year), comparing Isner and Querrey to the Big Four in serve and return stats, you get a clear picture of where the strengths and areas of improvement lie.

Here are Isner and Querrey compared to the Big Four in serving statistics among all players on the men’ tour:

Pretty much expected from the American twin towers, with service category stats well above their ATP Rankings.

But like they say in college football, defense wins championships, and it’s in the return of serve and defensive categories where Isner and Querrey struggle compared to the Big Four:

Quickness and defense aren’t their bread and butter, so the American twin towers need to pound away on serve, avoid long points, and end points quickly when possible.

“Isner is very effective at what he does,” Gilbert reiterates. “Our top guys are big guys and play more of a big-serve big-forehand game. They’re not all-arounders. Comparing them to the Big Four, they’re just not as nimble and not great defenders and movers. They don’t have the speed to be those type of players.”

Tennis federations can recruit player types, but in the end you can’t pick your players. Neither Isner or Querrey were highly-touted juniors on the fast track to pro success, but developed later as opposed to many top players. And like fellow tour tree-toppers such as Croatia’s 6-foot-10 Ivo Karlovic and Canada’s 6-foot-5 Milos Raonic, they’ve done pretty well for themselves.

In an era of speed and court coverage, America’s twin towers Isner and Querrey continue to power through opponents, surfaces, and the assumptions of what a modern tennis player should look like.

Share your thoughts on U.S. men’s tennis and meeting the challenges of a changing global tennis landscape in the comment section below.