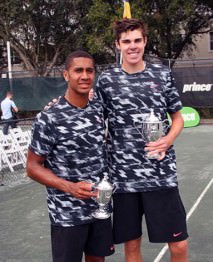 Boca Raton’s Michael Mmoh won the ITF Grade 1 junior tennis event on the grasscourts of Roehampton in Great Britain on Friday, giving the 17 year old momentum heading into the Wimbledon juniors, which started on Saturday.

Mmoh was stretched to a third-set tiebreak in his opening match, then failed to drop a set during the remainder of the tournament. Mmoh is the fourth seed at the Wimbledon Junior Championships this week.