A Giant Among Us: Remembering Larry Turville

Larry Turville of Dunnellon, Fla., a life-long competitive tennis player and pioneer of the sport, died on October 10 after a battle with cancer at the age of 71.

For Turville, the game of tennis was a family affair. Turville was born in 1949 – the same year his father, Edward Turville, along with prominent Florida players and organizers Eddie Herr, Clarence Varner and Gardnar Mulloy seceded from the Southern Lawn Tennis Association to form the Florida Lawn Tennis Association, the earliest instance of USTA Florida. The senior Turville served as the first president of the FLTA as well as President of the United States Lawn Tennis Association (now the USTA), and he was a former Davis Cup Captain. Given the family ties to tennis, it is not surprising tennis played a major role in Larry Turville’s life. 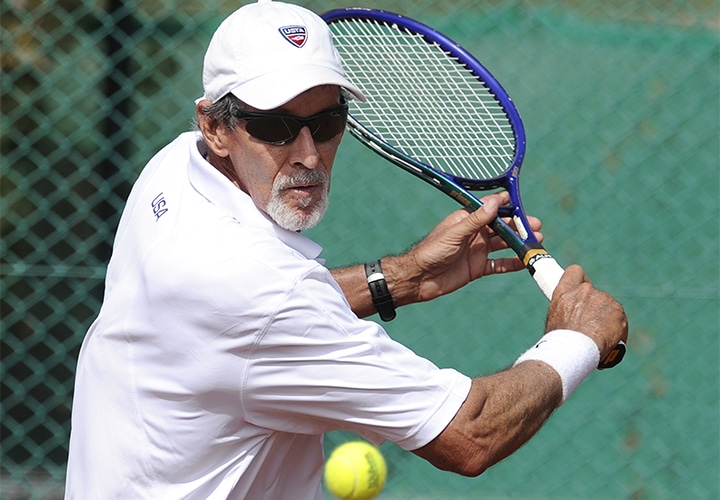 Turville grew up in St. Petersburg, Fla. and got his start on the court playing junior tennis. An opponent he ran into regularly at those weekend juniors’ tournaments was Armistead Neely.

“He was three years younger than me, and you know at that age, you shun those younger than you,” chuckles Neely, a former professional player who was one of Turville’s longtime friends and doubles partners. “As we became a little older, he was a force as a player in the 18 & under. I started wondering ‘who is this guy, he’s pretty good!’”

That force wasn’t just noticed by Neely either – Turville’s first year playing in the 18s division, he was ranked No. 1 in Florida. He went on to play collegiate tennis at Georgia Tech in Atlanta, where he earned All-American honors. One of Turville’s most noticeable and leverageable features on the court also blossomed while he was a Yellow Jacket.

“He didn’t get so tall until he got to Georgia Tech,” recalls Neely. “He became very noticeable when he shot up to 6’7”.”

After graduation, Turville began playing the nascent professional tour and personally experienced the difficulty of establishing a pro career and entering the main ATP Tour. He believed for inexperienced players such as himself, there was a need for a training ground with real tournament competition.

“There were a group of up-and-coming young players who didn’t have any tournaments to play in the winter, so we decided to start our own circuit,” Turville shared with the Washington Post in 1977.

Together with Neely, the duo founded a series of regional men’s tournaments in 1971 that was named the World Association of Tennis Champions (WATCH). Based in Florida, the tournaments were staged in segments and took place outside the orbit of the ATP Tour – and became known as “satellite tournaments.” After professional rankings were introduced in 1973, the WATCH circuit arranged with the ATP to award ranking points so that players on the edges of the pro tour would have more competitive opportunities to improve their rankings and advance to the main events.

“In total, we had more than 800 players competing from about 40 different countries,” shares Neely.

By the middle of the 1970s, satellite tournaments were being staged across the U.S. Turville reached a career-high singles ranking at No. 210 in 1976 while competing on the ATP Tour, and qualified for Wimbledon, the US Open and the French Open. In 1979, the USTA took over the satellite circuit just as Turville was preparing to leave to assume the position of tennis coach for the Rice University Men’s Tennis Team. Turville would teach at Rice for the next twenty years but stayed focused on keeping his game in tip-top shape.

“Larry and I worked together when he was a coach at Rice University, we did a Nike sports camp together back in the day,” says Charlie Hoeveler, the founder of US Sports Camps who played against Turville several times. “He had such a beautiful, complete game. He was so admired and respected on the court by the people he played against, whether it was in singles or doubles. He was just that type of guy, he stayed with it and stayed healthy.”

Turville started playing USTA age group tennis when he was 35 and later went on to carry one of the most distinguished records in US senior tennis. In all, he won 22 National Singles Championships and 24 National Doubles titles. The majority of those doubles titles he shared with longtime doubles partner, Neal Newman.

“We played together for more than 30 years,” shares Newman. “We had great times together and really developed as players together. He was an amazing doubles partner and an amazing person.”

“That was really big for me,” Turville told the Sarasota Herald-Tribune at the time. “I thought it would be nice someday, but it wasn’t something I ever figured I would do.” 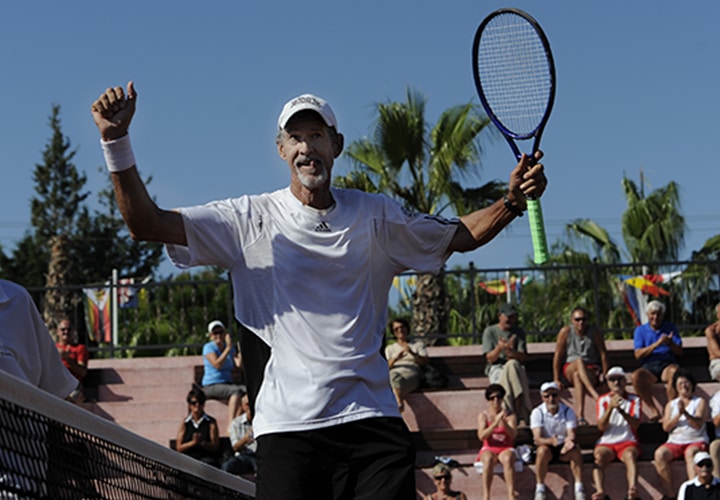 His passion and commitment to senior tennis were instrumental to the development of the Florida Super Senior Grand Prix, a national and worldwide event where top-level players compete for three months in Southwest Florida. The format is reminiscent of the old WATCH circuit and offers points and prize money, but for players 55 and over.

Turville chaired the USTA Florida Competition Committee for some time and served on the USTA Adult Competition Committee for four years. Beyond that, he was one of the founding members of the National Senior Men’s Tennis Association (NSMTA), which aimed to foster tennis competition among senior men on a nationwide basis. The primary goals of the Association were to increase interest in senior tennis, raise awareness of the health benefits from participation, improve the quality of senior events and provide support to other established charities serving underprivileged children and seniors in the tennis community. Turville was a member of the Board of Directors.

“I can say without exaggeration that Larry has been one of the most creative, energetic, and valuable members of our Board of Directors,” wrote the Association’s president Jimmy Parker. “We already feel the loss, and he’s barely gone.”

Throughout his decades of dedication to the game both on and off the court, it is no surprise Turville’s imprint on tennis is felt far and wide by many members of the community.

“I received a text from Larry just last month, when we knew that his cancer had spread and was becoming more difficult,” shares Brian Cheney, who has known Turville since 1971 and has competed both with and against him. “In that text he said, ‘well Brian, I’m fighting hard here in the third set.’”

Turville was known for being friends with practically everyone on the senior circuit. He was welcoming, supportive and highly respected. Despite being fierce competitors on the court, Turville took the time to develop deep bonds with players, something that left an impact on those who knew him.

“We were professional traveling companions, doubles partners, junior friends and senior competitors who played against each other many times,” says Neely. “Tennis being the vehicle of course, you can’t get much closer than that. That developed over 50 years, and you don’t find friendships like that. It was very special.”

“We had a great relationship. We got along so well that our friendship grew strong. I got to learn from his level of play and appreciated that he knew how to do things right,” adds Newman. “We were close friends who competed in tennis events together all over the country.”

Behind his wife Kelli, Turville’s stature in tennis is something his colleagues say he valued the most. He strived to be thought of as an innovator, he championed for fairness in the game and he stood up for the players who had no voice. His actions, whether behind the scenes or in the throws of a match, speak to his character and leadership in the sport and will continue to serve as lessons to future generations of players.

“I think most tennis players, and I include myself, are a little selfish. Tennis is a lonesome sport. It’s you against the field. So you’re taught to fight like the devil against the person on the other side of the net,” says Neely. “You need to shed that selfish attitude, which I learned from Larry, and be more responsive to the needs of your fellow tennis players. Try to learn what they need, work for their needs, and fight for those needs.”

Larry Turville’s positive influence on tennis will be forever felt throughout USTA Florida, the Florida tennis community, and beyond. We extend our deepest sympathies to Turville’s family, friends and colleagues. To share memories or condolences, please visit the National Senior Men’s Tennis Association forum.