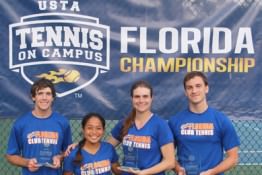 Tennis on Campus, the college and university club program that provides year-round competition between non-NCAA club teams, will see six tournaments in Florida during the 2014-15 school year, leading to the Florida championships and a chance to qualify for the USTA Tennis on Campus National Championships.

Coordinated by the USTA Florida Section, the 2014-15 schedule of events will consist of:

The Florida State University tournament date on Sept. 27-28 will also kick off the “Where Do “U” Tennis on Campus?” contest. Teams can win cash and/or boxes of tennis balls for their clubs at posting a short video online showing the most interesting place they “Tennis on Campus” and posting it to Facebook with the hashtag #UTOC. For more information contact Desirae McLaughlin at tennisoncampusflorida@gmail.com.

“With a larger-than-ever commitment to promoting Tennis on Campus in Florida, I am excited to see how many schools and students we will be able to reach this season,” said USTA Florida Tennis on Campus Coordinator Desirae McLaughlin on the 2014-15 season.

“Our goal was to really recruit for girls, and now we have more girls than guys going to the first tournament which is super exciting,” said Florida Gulf Coast University club team member Courtney Miles. “Also my hope is to make my team better and closer as a whole.”

About USTA Tennis On Campus
The USTA’s Tennis On Campus program is designed to provide college students with opportunities for team camaraderie, social networking, and rivaled competition through tennis without the rigors of a varsity program via college/university “club” tennis teams. Perfect for athletes who have chosen not to make the jump from high school to college varsity, Tennis On Campus offers co-ed team-based play (using the World TeamTennis scoring format), regional and national championship competition, and helps students maintain active and healthy lifestyles through their college years. Currently, the program is offered on over 500 college campuses.

* Prior to 2007, all Florida teams advanced directly to the USTA Tennis on Campus National Championships

For more information on the USTA Florida Tennis on Campus series go to the new Tennis on Campus website at www.USTAFlorida.com/TOC, or contact Desirae McLaughlin at tennisoncampusflorida@gmail.com.