Proving to be a force to be reckoned with, the top seeds pulled out all the stops during the finals at the 2021 USTA Florida “Bobby Curtis” 16s/18s Junior Section Championships, where the top two seeds won every boys’ and girls’ singles division save one. The tournament was contested June 19-23, 2021, at the USTA National Campus in Orlando. 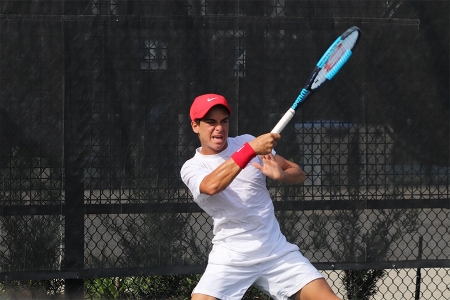 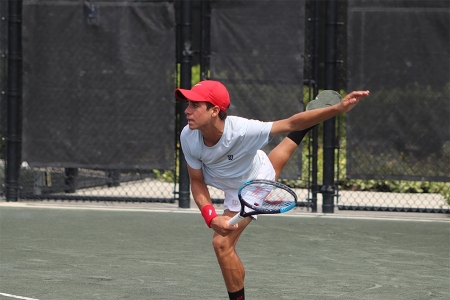 Top-seeded Roy Horovitz (Key Biscayne) cruised his way through the quarterfinals in the boys’ 16s division, only dropping four sets along the way.  He knocked out the No. 12 and No. 5 seeds, before advancing to the finals with an unopposed victory over the No. 3 seed in the semis. He met No. 2 seed and frequent opponent Tanner Povey (Indian Rocks Beach) in the final, where Horovitz prevailed with a 2-6, 6-3, 6-2 victory.

“The first set [in the finals], I was destroyed,” said Horovitz when thinking back on a moment that stands out from the match. “In the second set, I didn’t have a great start. But I was happy, I kept myself positive and I was able to come back from it.”

Victory was indeed sweet for Horovitz, who fell in the quarterfinals of the 16s division in the 2020 edition of the event. He was also a “Bobby Curtis” finalist in the boys’ 12s doubles competition in 2018. The rising freshman is ranked No. 3 nationally and No. 2 in Florida and the Southeast on TennisRecruiting.net’s recruiting rankings. 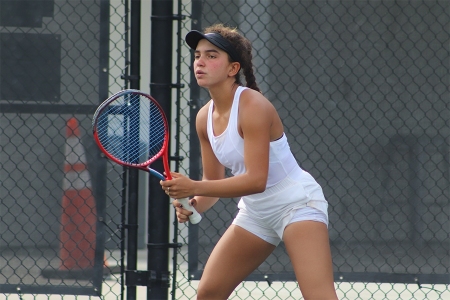 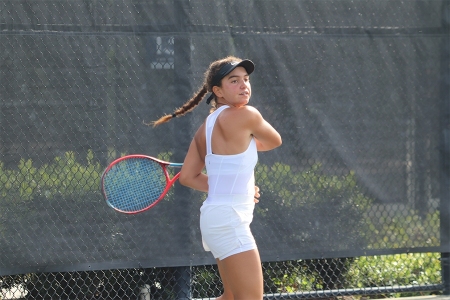 The biggest shakeup came in the girls’ 16s division – the only division where the top two seeds did not make it to the championship match. Despite dropping the second set in her round of 16 matchup, No. 9 seed Ella Pogue (Tampa) rallied in the third to best the No. 1 seed Carolina Bohrer Martins (Orlando) to advance to the quarterfinals. From there, she overpowered the No. 15 and No. 7 seeds on her way to the final, where she went head-to-head with No. 4 seed Yanire Marte Gonzalez (Royal Palm Beach). Gonzalez was successful in her quest for the title, winning the championship 6-4, 6-3. In addition to the No. 9-seeded Pogue, Gonzalez upended No. 6 seed Gabriella Goyins (Pensacola) and No. 2 Alex Ackman (Winter Garden) on her way to the finals.

When asked what moment stood out the most from this tournament, Gonzalez said, “my semifinal, after we split sets. I had a moment with my coach and he really spoke to me and he really inspired me. He supported me to continue, telling me that he believed in me. Even though he was back home, I felt like he was here watching me and that moment really stood out to me.”

Earlier this year, Gonzalez was a divisional consolation winner in the girls’ 18s at the 2021 USTA Florida March Level 4 Championships. She also previously competed in the “Bobby Curtis” singles tournaments in 2019, 2018 and 2017. A member of the senior class of 2022, Gonzalez sits at No. 9 in Florida in TennisRecruiting.net’s recruiting rankings. 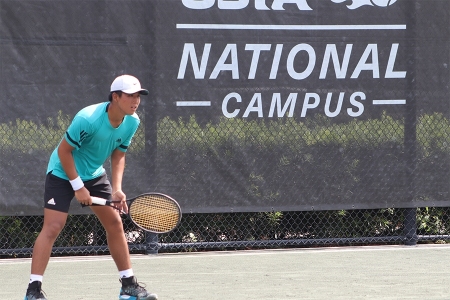 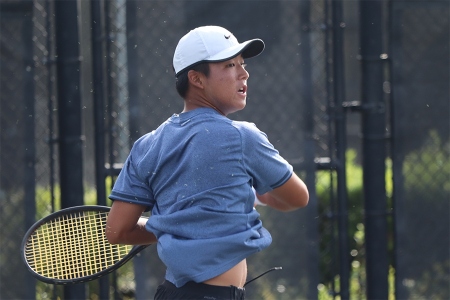 The final of the boys’ 18s division came down to a matchup between two seasoned “Bobby Curtis” tournament contenders – top-seeded Jonathan Irwanto (Miami Shores) and No. 2 Kian Vakili (Longwood). On his journey to the championship court, Irwanto claimed victory over the No. 11, No. 7, and No. 10 seeds. Vakili conquered the No. 13 and No. 15 seeds in the early rounds before defeating No. 3 seed Luca Hotze (Miami Shores) in the semifinals. Irwanto went on to edge out the victory 6-4, 3-6, 6-3.

“[Winning the state championship] means a lot to me,” said Irwanto when he stepped off the court. “I train a lot everyday to get results and these are the results I’ve been hoping for.”

Irwanto was part of the champion 4a boys’ doubles tennis team in the 2021 FHSAA State Tennis Championships, representing Dr. Michael M. Krop Senior High School. He has been an active participant in USTA Florida’s “Bobby Curtis” tournaments since 2017, most recently reaching the round of 32 in the 18s. According to TennisRecruiting.net’s recruiting rankings, the junior is ranked No. 6 in Florida, No. 10 in the Southeast, and No. 31 nationally. 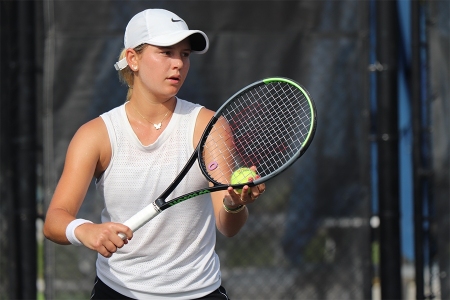 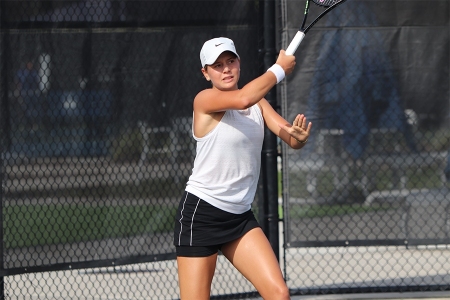 A blockbuster bout between two accomplished junior players capped off the quest for the girls’ 18s title, as No. 2 seed Charlotte Owensby (Boca Raton) faced off against last year’s 18s finalist, top-seeded Ahmani Guichard (Seminole). A second chance at the title for Guichard, she steamrolled her way through the main draw, taking out the No. 11, No. 9 and No. 6 seeds on path to the final. Not one to be outmatched, Owensby trounced the No. 13 and No. 8 seeds before knocking out fellow Boca Raton representative No. 5 Lara Smejkal in the semifinal. In the championship match, Owensby ended Guichard’s pursuit for redemption in the 18s, with a 6-4, 6-2 score that sealed her victory.

“Winning the state championship means a lot,” shared Owensby after her finals match. “A lot of amazing players have come from this tournament and now standing here at 18, coming back and playing it again and winning it, it feels great.”

It’s been six years since Owensby captured the girls’ 12s title in the 2015 “Bobby Curtis” Junior Section Championships, but since then, the now senior has a racked up several other tennis achievements. Coming off of her girls’ 14s title at the 2017 Easter Bowl, she represented the U.S. as a member of the ITF World Junior Tennis team and helped lead the team to victory with teammates CoCo Gauff (Delray Beach) and Gabriella Price (Boca Raton). That same year, she earned a USTA Pro Circuit wild card at a USTA Player Development Camp, giving her the opportunity to compete in two $15,000 USTA Pro Circuit events. Owensby was also a member of the 2019 U.S. Junior Fed Cup Team. Currently, she is ranked No. 2 in Florida, No. 3 in the Southeast, and No. 17 nationally on TennisRecruiting.net’s recruiting rankings. 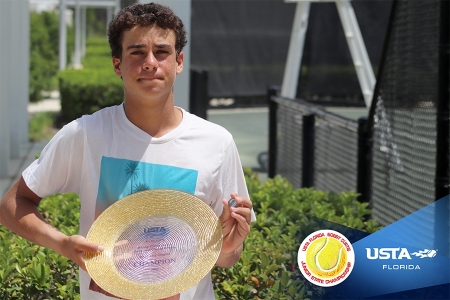 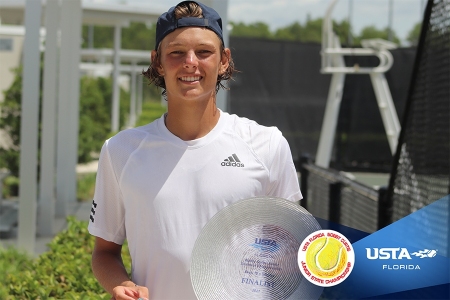 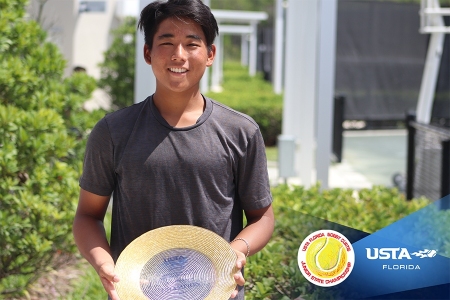 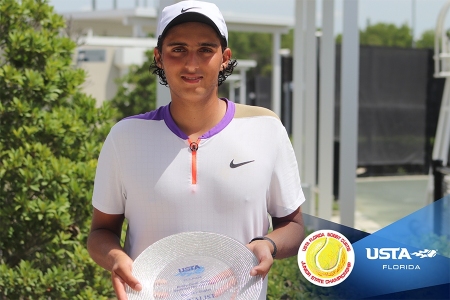 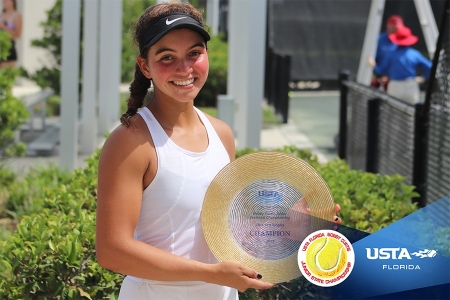 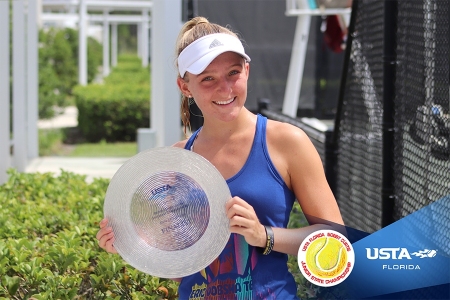 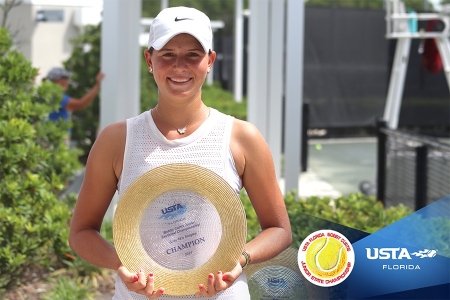 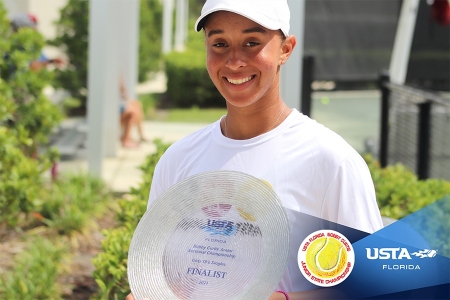