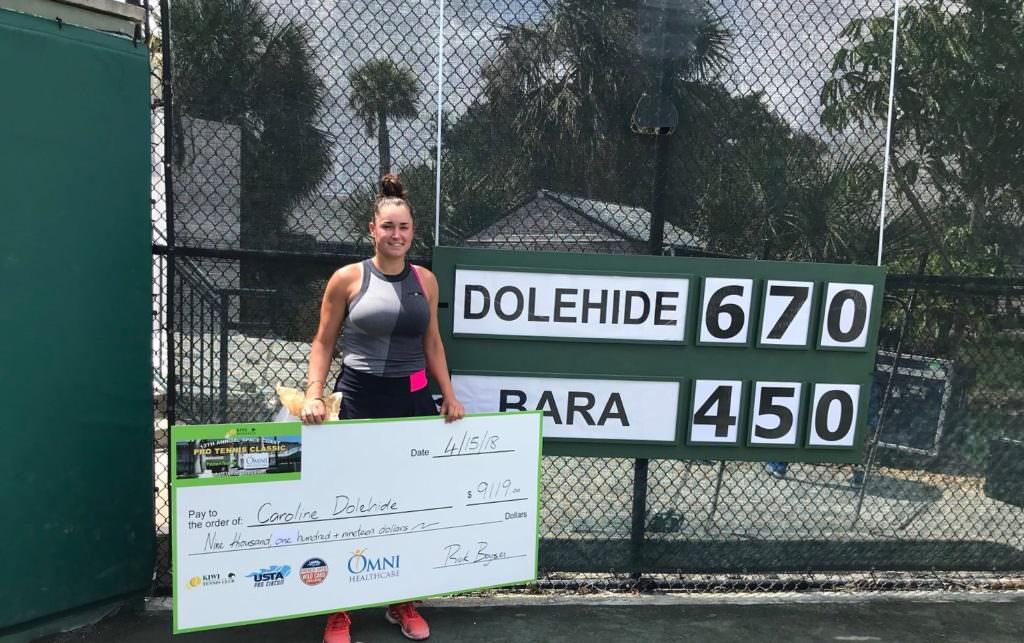 The 19-year-old Dolehide overpowered Bara while executing deft drop shots to keep her scrambling opponent off-guard, and dealing with some challenging weather conditions. Last year Dolehide lost in the final of the $60,000 event in Charlottesville to American countrywoman Madison Brengle.

Bara attempted to fend off exhaustion after winning three matches on Saturday, including the doubles title with Spanish partner Silvia Soler-Espinosa. In the final they topped Americans Jessica Pegula/Maria Sanchez 6-4, 6-2.

The No. 7-seeded Dolehide upset No. 3 seed Jana Cepelova in the third round and received a walkover against the top-seeded Brengle (back injury) in the semifinals. The unseeded Bara upended No. 2 seed Kristie Ahn in the second round 7-6(10), 7-6(4), No. 6 seed Ons Jabeur in the quarterfinals, and No. 4 Taylor Townsend 6-7(5), 7-5, 7-5 in the semifinals.

Dolehide trailed 2-4 in the first set of the championship match before stringing together four straight games to take the set. Swirling winds picking up late in the match frustrated both players, and Dolehide at one point received a code violation for smashing a racquet. Bara led 5-3 in the second set before she became visibly fatigued and lost the next four games leading to a handshake at the net.

The Chicago native is now 4-2 in career USTA Pro Circuit finals, winning her first of 2018. Last year she was 2-1 in finals, claiming championships at Surprise, Ariz., and Winnipeg, Canada, and finishing runner-up at Charlottesville. The 23-year-old Bara fell to 9-8 in career ITF/USTA Pro Circuit finals, appearing in her first final of the year. In 2017 she was 1-2 in finals, winning at Bastad, Sweden, and finishing runner-up at Pula, Italy, and Valencia, Spain.

For more info on the USTA Pro Circuit go to www.usta.com/en/home/pro/pro-tennis-events/ProCircuit.html.