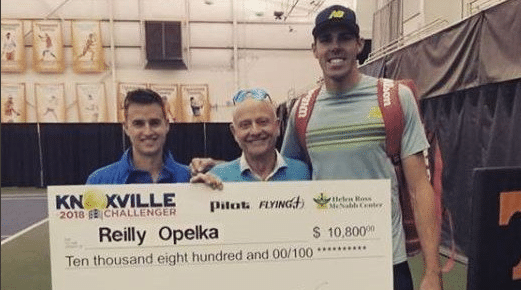 Opelka, the No. 8 seed at the $75,000 event in Knoxville, remained perfect in career ATP Challenger finals, winning his third after a 7-5, 4-6, 7-6(2) victory in the championship against fellow American Bjorn Fratangelo. It was his second ATP Challenger win of 2018 after Bordeaux, France in May, and followed his first in Charlottesville, Va., in 2016.

The 7-foot Opelka, who turned 21 in August, has been sidelined with varied illnesses and injuries in 2018, including mononucleosis in June. He rose to a career-high No. 116 on the ATP rankings this week.

“I wouldn’t even celebrate (reaching the) Top 100, if we’re being honest,” Opelka said afterwards. “That’s not my long term goal. Yes, it would be nice. I’m pleased with how I’m playing now and my main goal is to stay healthy and put in a really good off-season.”

In the all-unseeded doubles final, former Tennessee Volunteers Tennys Sandgren and Hunter Reese were beaten 7-6(6), 7-5 by Toshihide Matsui of Japan and Frederik Nielsen of Denmark. 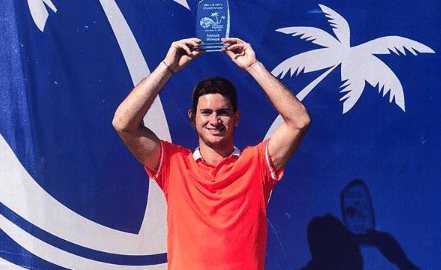 The 2018 Wimbledon juniors doubles runner-up and an IMG Academy student in Bradenton, in the final Mejia defeated American and No. 2 seed Strong Kirchheimer, a former Northwestern standout, 6-4, 6-4.

Mejia in the semis toppled No. 1 seed Fabrizio Ornago of Italy 6-2, 6-4, and in the second round he upset No. 3 seed Juan Manuel Benitez Chavarriaga of Colombia 6-4, 6-2, failing to drop a set through the tournament. In the first round he defeated former USTA Florida “Bobby Curtis” Junior State Singles Boy’s 16s champion Logan Zapp of Fernandina Beach, Fla.

“Nicolas has an incredibly bright future and was a pleasure to watch all week,” said Tournament Director Gary Bertoldo. “To get through the draw he had, without dropping a set all week, is incredibly difficult.”

Americans Trevor Allen Johnson and Patrick Kawka captured the doubles title in Niceville, in the final defeating the Irish-American pair of Julian Bradley and Justin Butsch 7-6(5), 6-4.

With more than 90 tournaments hosted annually throughout the country and prize money ranging from $15,000-$125,000, the USTA Pro Circuit is the pathway to the US Open and tour-level competition for aspiring tennis players and a frequent battleground for established professionals.