The University of Miami won its first Florida ‘Tennis on Campus’ series club title of the year over the weekend, edging the University of South Florida 26-24 in the Gold Bracket final of the UT Spartan Challenge in Tampa at the Hillsborough Community College Tennis Center. 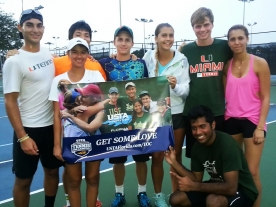 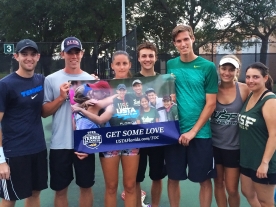 “Congratulations to the University of Miami ‘A’ team for reaching their 4th consecutive final and winning their first event of the season,” said UM Club President Steven Masciale. “It was an amazing weekend and we hope to have many more just like it. In two weeks we will be on the road in Orlando for the UCF Knightro Cup!”

The University of Florida won the first three 2015 Tennis on Campus events but did not attend the UT Spartan Challenge in Tampa. UM’s claims its first title of the year after losing to UF in the UF Gatorbowl (Gainesville), FAMU/FSU Battle in the Capital (Tallahassee), and USF Bull Run (Tampa) finals. 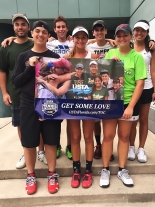 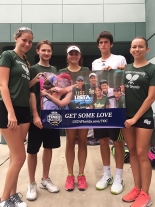 The next event on the 2015-16 USTA Florida ‘Tennis on Campus’ calendar will be the UCF-hosted Knightro Cup in Orlando on Nov. 21-22.

About USTA Tennis On Campus
The USTA Tennis on Campus program is designed to provide college students with opportunities for team camaraderie, social networking, and rivaled competition through tennis without the rigors or time commitment of NCAA varsity play. Tennis on Campus offers fun co-ed team-based play (using the World TeamTennis scoring format), regional and national championship competition, and helps students maintain active and healthy lifestyles through their college years. Currently the program is offered on more than 500 college campuses. The USTA ‘Tennis on Campus’ team format features men’s and women’s singles, doubles and mixed doubles, with a minimum of two men and two women per team.

For more information on the USTA Florida ‘Tennis on Campus’ series or to start a team at your school go to www.USTAFlorida.com/TennisOnCampus or contact Desirae McLaughlin at tennisoncampusflorida@gmail.com.