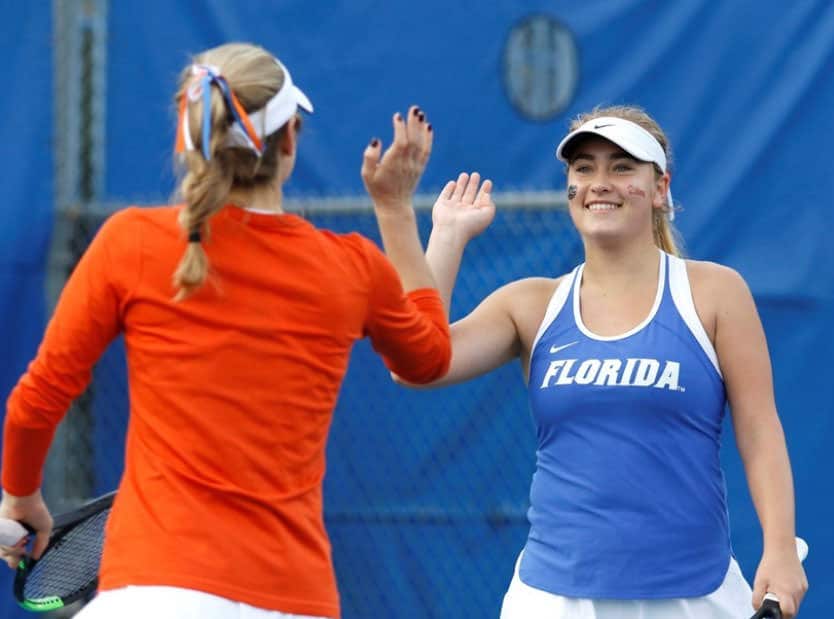 The University of Florida men’s and women’s teams were the only Florida schools to win out of regional play over the weekend during the 10th ITA Division I Kick-Off Weekend, held Jan. 26-29, 2018 at 15 men’s and 15 women’s campus sites across the country.

The UF squads teams advance to next month’s ITA Division I National Team Indoor Championships. The Florida women are the defending champions at the event.

The No. 3-ranked Gator women at their home Florida Regional did not drop a match in blanking both Cal State Fullerton and the University of Louisiana Monroe 4-0.

“It’s important to start out well — both days, yesterday and today, we did not,” said coach Roland Thornqvist of UF being slow out of the gate in the doubles. “But we were good enough to play out of those holes.”

In other women’s action, the No. 30-ranked Florida State women won their first match at the Vanderbilt Regional 4-1 over Virginia, but were then stopped by the No. 2-ranked host Vanderbilt 4-1 in the final. At the Texas Tech Regional, the No. 42-ranked Florida International University women fell to Wichita State 4-2 in their opener, then beat Saint Mary’s (Calif.) 4-2 in the consolation match.

The University of South Florida women went 0-2 in the Georgia Tech Regional, falling 4-1 to the host and No. 7-ranked Georgia Tech 4-1, then to Dartmouth 4-3 in their consolation match. The No. 17-ranked Miami women won their opener over UC Santa Barbara 4-0 at the Auburn Regional, but in the final could not overcome the No. 13-ranked host Auburn, losing 4-2.

The No. 9-ranked UF men shut out South Alabama 4-0 in the Florida Regional in Gainesville, then in the final blanked the University of South Florida 4-0.

“I thought Baylor played really well today,” said head coach Dwayne Hultquist after FSU’s first loss of the season. “They won all the crucial points in doubles and that is what put them over the top.”