The top seeds came in force during the Monday finals of the USTA Florida “Bobby Curtis” Junior State Doubles Championships in Orlando, where the Top 3 seeds won every boys’ and girls’ doubles division save one. The event was contested on Sept. 15-17 at the USTA National Campus.

The pair will bring their talents to the University of Louisville as both were decked-out in Louisville gear for the final.

“We won the 12s [in 2013] when it was held in Daytona, and winning this is even bigger,” Wilson said. “Our chemistry, our confidence together is big.”

Top seeds Ayshe Can (Weston) and Karly Friedland (Hollywood) won the Girls’ 18s title, in the final stopping No. 3 seeds Sophia Fornaris (Pinecrest)/Demi Snyder (Ft. Lauderdale) 3-6, 6-1, 10-5 in their first Bobby Doubles tournament as a team. Finding themselves down a set, they calmed their nerves to claim the championship in a third-set super-tiebreak. It was Can’s second Bobby Doubles title after winning the Girls’ 16s two years ago.

“Just keeping the ball in, keeping it deep, relaxing, calming each other down,” Can said of their key to turning the match around. “Just doing what we were doing to get to the final.”

The lowest-seeded winners at this year’s Bobby Curtis Doubles, and the youngest to win in their age division, were No. 6-seeded 14-year-olds Brooke Dugarte (Miami) and Violeta Martinez (Port Saint Lucie), who claimed the Girls’ 16s title two years after they raised the Girls’ 12s trophy in 2016.

“We always play the same tournaments,” Dugarte said, with Martinez finishing her sentence, “and we’re such close friends — it’s just easier to play together.” The pair have known each other 8-9 years, which helped them stay calm in the final after dropping the opening set.

“Mentally I think both of us were freaking out a little bit,” Martinez said regarding the first set, with Dugarte adding, “Yeah but we just decided we had to fight harder in the second set and that’s what we did, and we got the results…we play offensive, all we try to do is win at the net, that’s our main goal.”

In the Boys’ 16s final top seeds Jack Anthrop (Orlando) and Benjamin Zipay (Osprey) won in their first Bobby Curtis Doubles event playing as a team. Both had lost multiple finals previously with different partners, and Anthrop had won the Mixed 12s in 2015.

“I think we kind of dropped the movement at the net a little bit, we started playing their game at the baseline a little much,” Anthrop said of winning the first set 6-0 then fighting through a tiebreaker in the second set. Zipay said, “It was a 6-0, 3-0 lead, and I think we started taking it a little easier. They started playing really good tennis too, it wasn’t like we were missing.”

The four are friends off the court, and Zipay had gone to dinner with his opponents the night before the final. 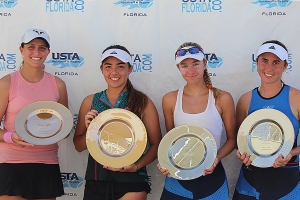 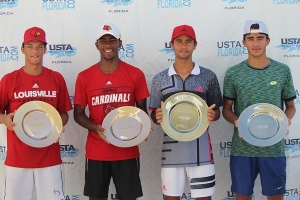 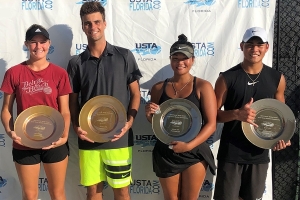 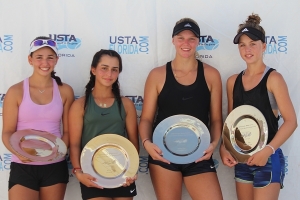 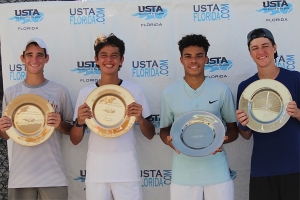 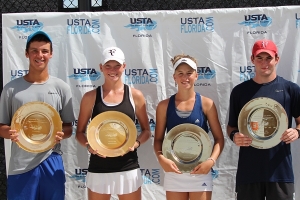 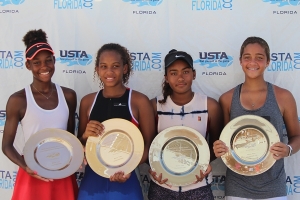 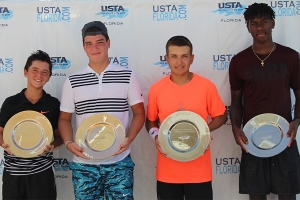 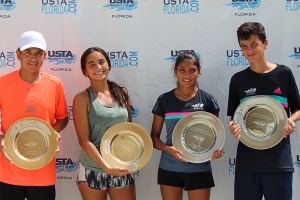 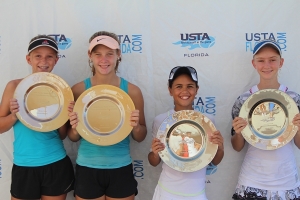 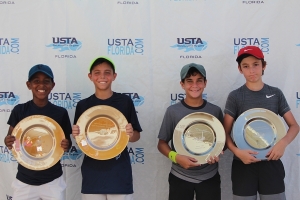 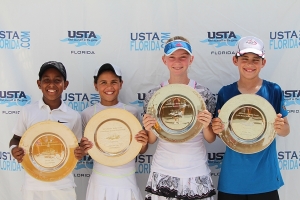