A strong competitor who dominated the Boys’ 12s single division at the USTA Florida “Bobby Curtis” Junior Section Championships in June, Jordan Lee (Orlando) and doubles partner Jerrid Gaines Jr. (Margate) were the top seed of the boys’ 12s doubles division. The duo sailed through the rounds of play, knocking off No. 3 seeds Victor Pignaton (Boca Raton)/Daniel Patsula (Miramar) in the semifinals before overpowering the No. 2 seeds Diego Custodio (Tampa)/Andre Bart (Orlando) 6-1, 6-4 in the final. While Lee is no stranger to USTA Florida’s “Bobby Curtis” tournaments, who in addition to his win in June 2021 was also the 2020 “Bobby Curtis” Green Ball Sectional Champion, it’s the first “Bobby Curtis” title for Gaines Jr.

Partners on the court for the 12s, Lee and Gaines Jr. were competitors in the Mixed 12s division, with Lee paired up with Ana Avramovic (Orlando) as the No. 1 seed while Gaines Jr. teamed up with Anita Tu (Melbourne) as a strong No. 2. Both pairs rallied their way through each round to meet in the finals where Lee/Avramovic took the Mixed 12s championship over Gaines Jr./Tu 5-3, 5-3.

The 14s divisions saw new champions all around. The Boys’ 14s came down to a face-off between the top two seeds. No. 1 Stefan Karatosic (Aventura)/Rafael Ferreira (Boca Raton) topped No. 2 Nathan Germino (Valrico)/Jack Satterfield (Tampa) 3-6, 6-3 [10-3] to secure a first career Bobby Doubles title for Karatosic and Ferreira.

In the Girls’ 14s, No. 3 seeds Bella Payne (Bradenton)/Sara Shumate (Bradenton) conquered the No. 2 seeds Daniela Chica (Miami)/Gabriella Rawles (Bradenton) in the semifinals to advance to the championship match. There, the Bradenton duo went 6-4, 6-3 over the top-seeded pair of Berklie Simmering (Fort Myers)/Katie Spencer (Orlando) to capture their first Bobby doubles titles.

Fort Myer’s Berklie Simmering and Tampa’s Jack Satterfield were the front-runner team in the Mixed 14s, but their efforts just couldn’t top Miami’s Caleb Chow and Daniela Chica, who only dropped four sets on their journey to the final. Chow and Chica would find victory with a 5-4(4), 3-5 [7-5] score to bring home the trophy.

Webster also made it to the finals of the Mixed 16s with partner Benjamin Saltman (Winter Haven) as the No. 8 seed, but was denied a second title of the weekend by third-seeded Catherine Goldman (Hollywood)/David Prasievi (Miami), who took the division with a 5-3, 5-4(5) record.

A force to be reckoned with in the Boys’ 18s, Lutz’s Samuel Frizelle and Ormond Beach’s Alex Han were the team to beat as the top-seeded duo steamrolled the No. 5 and No. 3 seeds in their path to the final. In the championship matchup, No. 6 seeds Maxim Michaels (Wellington) and Zak Vince (Clermont) couldn’t stop Frizelle and Han, who went on to claim their first Bobby doubles title 6-7(3), 6-2 [10-5].

Boca Raton’s Delaine Tribby and Blanka DeMicheli earned their first Bobby doubles crown in a blockbuster, underdog win in the Girls’ 18s. The unseeded pair advanced in the quarterfinals against the top-seeded team who retired from the match due to injury. In the final, Tribby and DeMicheli went on to capture a 7-5, 6-0 victory over the No. 4 seeds from Bradenton, Maria Markosov and Paradise Traub.

Finally in the Mixed 18s, No. 1 seeds Sophia Webster (Bonita Springs) and Tygen Goldammer (Estero) rallied for the crown against the No. 4 seeds from Bradenton, Maria Markosov and Phillip Dell. Despite a strong effort from Markosov/Dell, the duo of Webster and Goldammer sealed the win 3-5, 4-2 [7-1]. 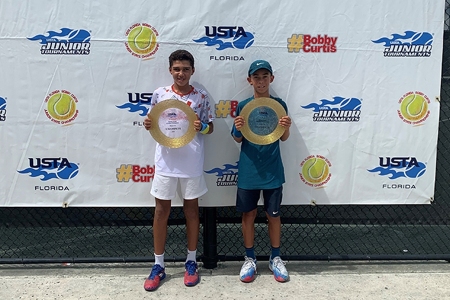 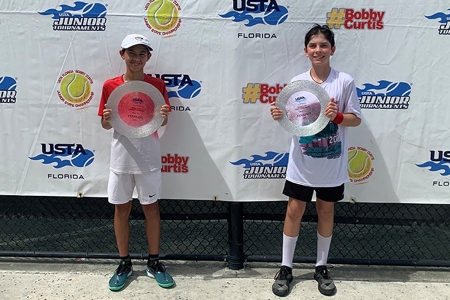 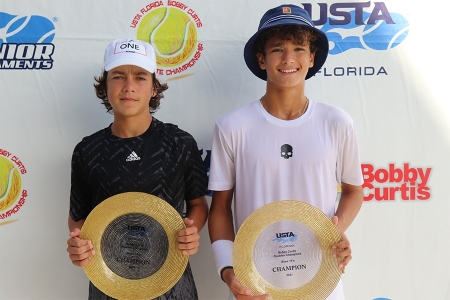 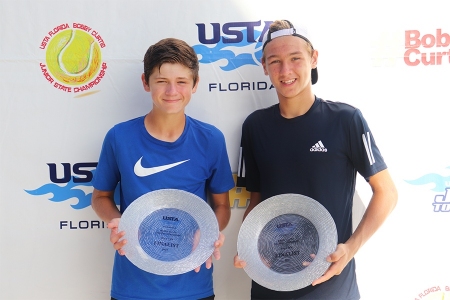 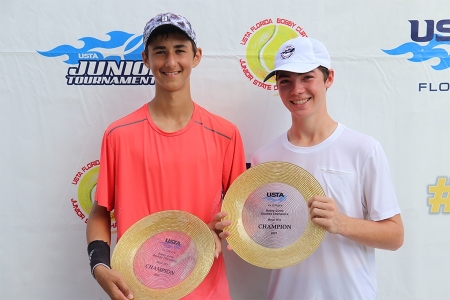 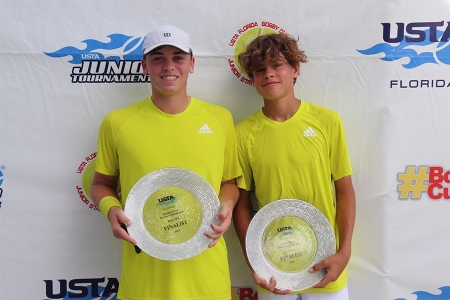 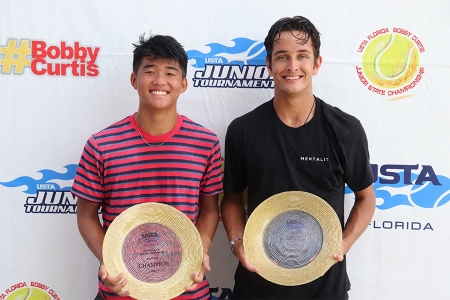 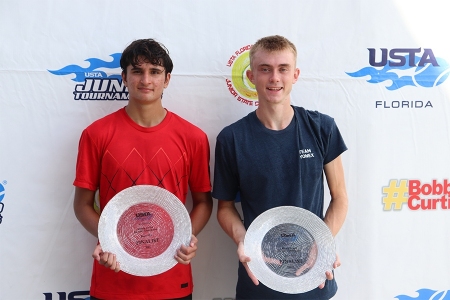 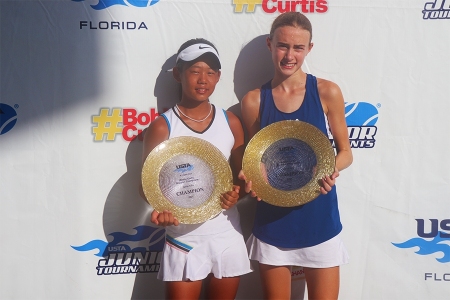 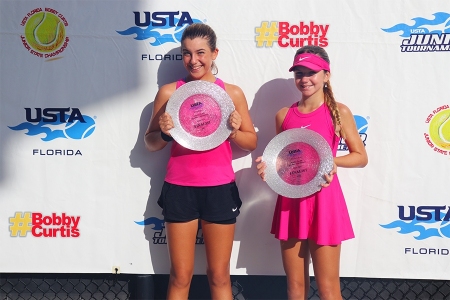 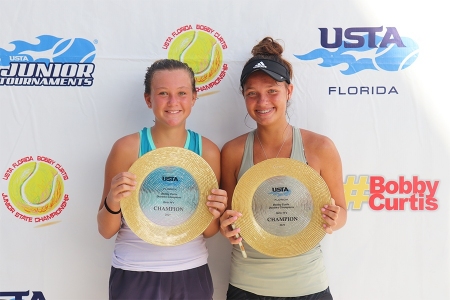 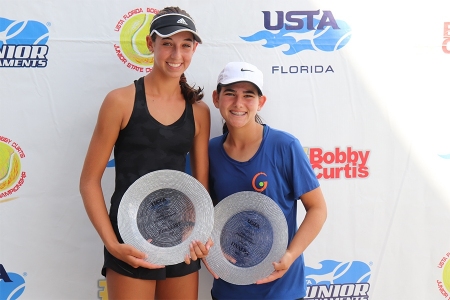 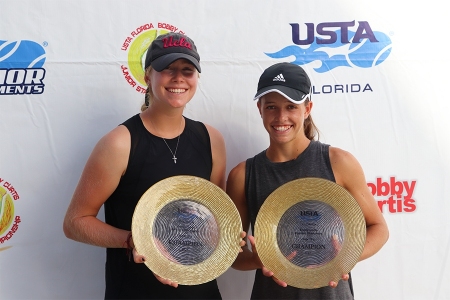 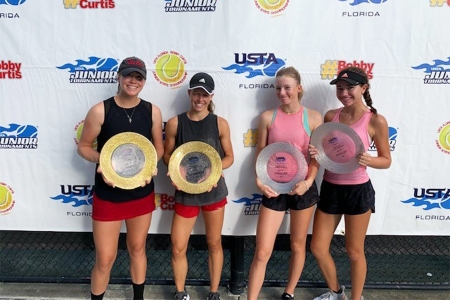 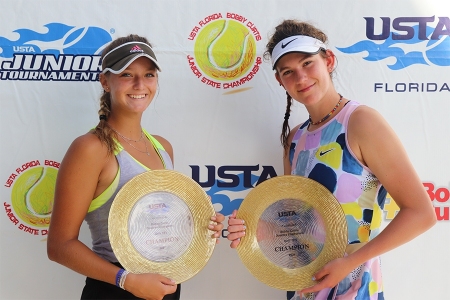 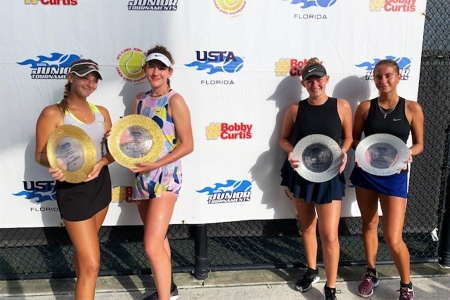 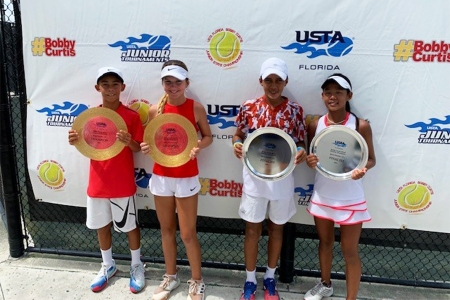 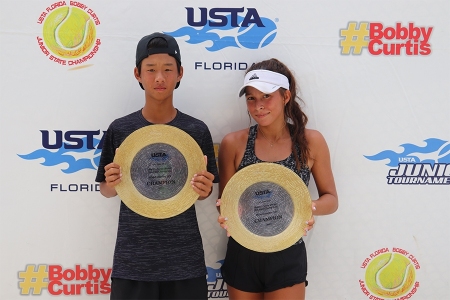 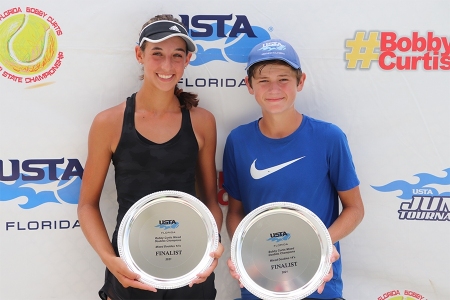 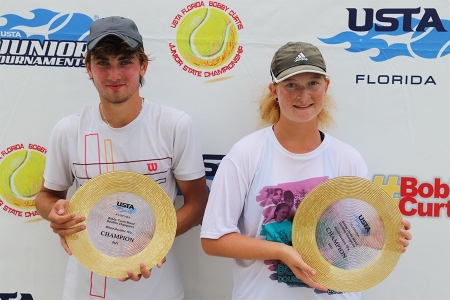 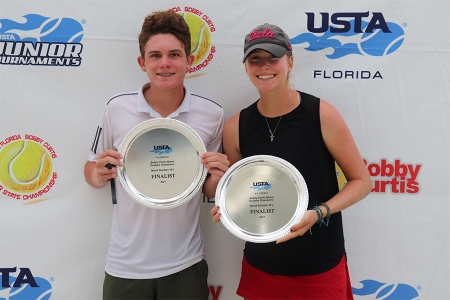 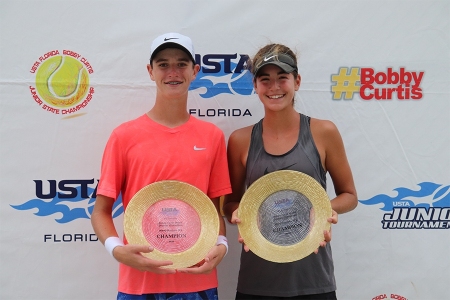 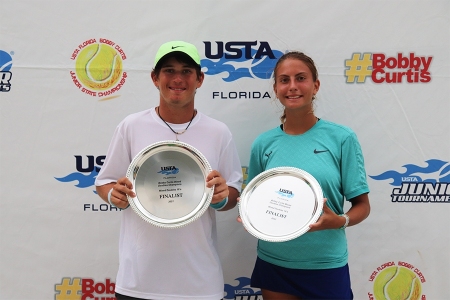