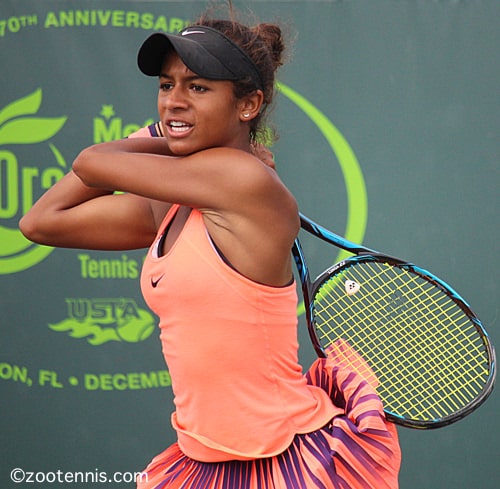 Fourteen-year-old Whitney Osuigwe was born into tennis, with her father Desmond working as a coach at the IMG Academy in Bradenton for the past 19 years.

After winning the Junior Orange Bowl 12s title in 2014, Osuigwe went on to capture the 14s Easter Bowl title and reach the final of the USTA 16s National Championships in 2015. Last year she turned her focus to International Tennis Federation (ITF) Junior Circuit events, with her ranking going from 413 to No. 111 over the course of the year.

Osuigwe closed 2016 with a semifinal appearance at the prestigious Metropolia Orange Bowl, an ITF Grade A event held at the Veltri Tennis Center in Plantation. An unseeded wild card, Osuigwe defeated fellow 14-year-old Marta Kostyuk of Ukraine in the quarterfinals before falling to eventual champion Kaja Juvan of Slovenia in the semifinals. Kostyuk went on to win the Australian Open girls title last month.

This month, Osuigwe earned her first ITF Grade 1 title at the Asuncion Bowl in Paraguay. Again unseeded, Osuigwe defeated the No. 4 seed in the second round and took out the top seed, Eddie Herr champion Maria Carle of Argentina, in the semifinals. In the final, Osuigwe prevailed over unseeded Draginja Vukovic of Serbia 6-3, 6-2, with the title moving her ITF ranking into the Top 50.

Desmond Osuigwe is not surprised at how quickly his daughter has established herself on the ITF Junior Circuit.

“I think if you train the right way, you are going to have the results you expect,” Desmond Osuigwe said. “I have seen the change coming, and she’s been waiting for this moment. She wanted to have the opportunity.”

The Orange Bowl and the Asuncion Bowl are both played on clay, a surface she prefers.

“She’s going to have better results on clay courts of course, because clay is her favorite surface,” Desmond Osuigwe said. “But having said that, I think the mindset is to be able to play your best tennis regardless of the surface. And she’s the type of girl who can adjust to anything.”

Osuigwe’s next two tournaments are a Grade 1 and a Grade A in Brazil, with a few more good results there guaranteeing her entry to the main draw of this summer’s junior slams, one of her goals. She will also mix in some lower level professional events, as she did last summer, when she made the quarterfinals of two $10,000 USTA Pro Circuit tournaments.

Recreational tennis opportunities for both youth and adults are expanding starting this month in Monroe County.

Florida Keys youth teams out of Key West, Marathon, Islamorada, Key Largo and Ocean Reef will compete in USTA Junior Team Tennis league play for all ages up to 18.

“Parents can still sign-up their children or contact me to learn more about USTA Junior Team Tennis,” says Cathy Nordlund, USTA Florida tennis program coordinator for Miami-Dade and Monroe counties. “We are very excited about introducing JTT to the Florida Keys, and bringing together kids to meet other players and experiencing team competition.”

USTA Junior Team Tennis brings kids together in teams to play singles, doubles and mixed doubles against other teams. It promotes social skills and important values by fostering a spirit of cooperation and unity, as well as individual self-growth. JTT provides a fun environment for kids in which they learn that succeeding is really more about how they play the game — win or lose. Nearly 100,000 kids from coast to coast play Junior Team Tennis annually.

Youth who compete in the local Florida Keys league will have an opportunity to participate in the USTA Florida Spring Team Tennis Challenge in Boca Raton. For more info or to join a local team contact Cathy Nordlund at nordlund@ustaflorida.com or (305) 796-5816.

This fall, Monroe County adult leagues will be separated into two flights — Upper Keys (Ocean Reef to Islamorada) and the Lower Keys (Marathon to Key West) to reduce travel for teams.

“Tri-level Leagues will also start in the fall, allowing friends at different NTRP (National Tennis Rating Program) levels to play on the same team,” says USTA Florida Local League Coordinator Donna Kass. “It’s a little challenging to get leagues going with so much real estate involved, but the Keys-area champions were so excited at the playoffs against the South Miami-Dade teams last year.”

USTA Leagues is the largest recreational tennis league in the world, with more than 904,000 players and most leagues offering advancement to sectional (state) and national championships. Age groups include Adult 18 & Over, Adult 40 & Over, Adult 55 & Over, Adult 65 & Over, in addition to mixed doubles leagues, Combo, Tri-Level, Flex League and other options.

For more info on USTA Florida Adult Leagues in the Florida Keys contact Donna Kass at (305) 298-5993, or TheKasses@aol.com, or go to www.ustaflorida.com/leagues.