Nearly 100 adult tennis players of varying ages and skills pulled an all-nighter this past Saturday, taking to the courts at Academia Sanchez-Casal for the first-ever Blacklight Overnight tennis event in Naples, Fla. A total of 20 teams played in the inaugural event, which kicked off at 6 p.m. Saturday and lasted until 6 a.m. Sunday.

Teams played dozens of short-format matches entirely on blacklight courts, powered by XGLOsive LLC. A DJ, midnight buffet and cash bar kept the energy level up throughout the night.

In the end, the team “American Bad Aces” took the title and the $1,000 cash prize. “Team Limelight” was the second-place finisher, taking home the $200 consolation prize. 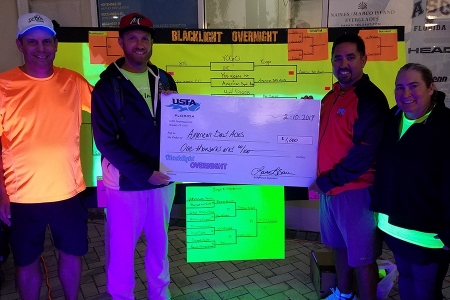 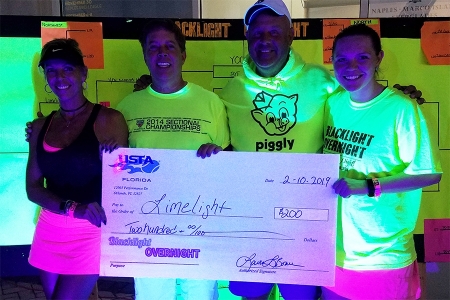 “USTA Florida has a reputation for being innovative and fearless,” said USTA Florida Executive Director Laura Bowen. “We are not afraid to take risks and try new things. I think this event shows how committed we are to delivering tennis in a way that is fun and serves everyone. Every team had players of different ages, genders and skill levels — and they all played with a low-compression ball.”

Get your GLO on!! The first of it's kind – #BlacklightOvernight – an all night tennis tournament under the stars. 👽👀🎾Teams will compete all night in the blacklight for a $1,000 prize. Stay tuned to our social media for more updates.

For many teams, the idea of camping out with friends and family, along with dressing up in glow-in-the-dark attire, was what attracted them to the event.

Jenna Richardson, captain of “You Wanna to Hit This?” said the chance to meet fun new players and have an out-of-the-ordinary experience with friends was worth the trip from Orlando to Naples.

“The orange ball allowed for all levels of players to be successful and we had the opportunity to play with people we never would have normally played with,” she said. “I can’t wait to play next year.”

Magali Holt, a former college player at Florida International University, said, “It was really great to be able to experience a whole new style of tennis. I think our sport is so versatile. Blacklight Overnight was a blast.”

Teammate Carly Davis added, “It was a great experience to play against so many teams in no-pressure matches. Everyone was truly cheering and encouraging each other throughout the tournament. I heard many people already planning for next year. I hope we have more of these events in the future!”

The first of it's kind – an adult tennis tournament under the stars with the help of XGLOsive Blacklight Tennis competing for a $1,000 PRIZE! Tag yourself, your friends, or your teammates!

USTA Florida originally partnered with XGLOsive LLC in 2015. Since that time, the organizations have worked together on dozens of events for youth, adult, military and families. This was the first team tournament in the blacklight environment. In April the organizations will again partner-up to break another barrier, working with Love Serving Autism to deliver the first XGLOsive event for adaptive participants at the Palm Beach Gardens Tennis Center.

“We have been partnering with USTA Florida since 2015, and we have tested a number of different formats in the blacklight environment,” said XGLOsive LLC Founder/Owner Jason Cordova. “To show that tennis really is for everyone is truly special.”