2019 Junior Competitive Player of the Year Awarded to Logan Zapp and Sophia Fornaris.

This award is presented to a USTA Florida ranked junior player considered to have had the most outstanding full season performance in local, state, and national events and who most nearly approaches ideal sportsmanship, conduct and character.

History: In 1976, then FTA President Tom Garlough suggested creating an award in memory of Albert Carrington Balink due to his devotion in promoting junior tennis. Mr. Balink emigrated from the Netherlands and settled in Pensacola via Pound Ridge, NY and Ft. Lauderdale. He and his family were the founders of the Pensacola Racquet Club creating a “tennis boom” in the Florida Panhandle. By sponsoring international junior player participation, he enhanced the quality of tennis events throughout Florida and the US.

Logan Zapp may agree: the only thing better than winning this award in 2018 is winning it again in 2019. With titles such as “2019 Winter Nationals Singles Champion” and “January 2020 USTA National Campus Sportsman of the Year,” there is no room left to wonder why Zapp’s junior career has been so successful. Boasting collegiate offers from Harvard University, Princeton University, and Stanford University to name a few, Zapp says, “I’d like to thank the USTA for providing me the opportunity to play tournaments and just do what I love everyday. Proud to be a Tar-Heel!” 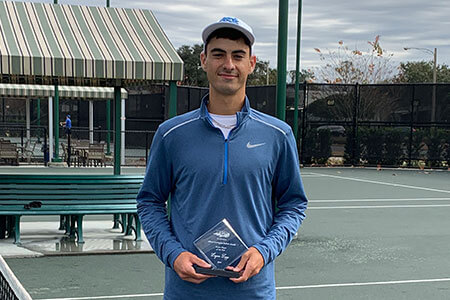 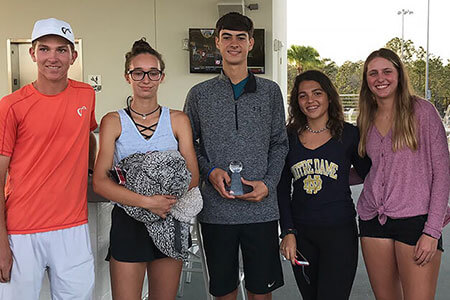 Zapp’s coach chimes in, “This has been one of the few students in my experience to look at the bigger picture and understand that you can lose some while getting better, while developing your game.”

Earning an Advanced Certificate of Education through Cambridge University in just 3 years before completing his high school education through Laurel Springs Private Online School during his 4th year, Zapp observes, “I believe education is extremely important in tennis and life (attaining a weighted GPA of 4.6).  Rising to the top allowed me to have opportunities to play college tennis at my choice of elite college programs, and ultimately sign with the University of North Carolina at Chapel Hill.”

State your service, accomplishments, achievements and/or contributions:
Thank you for consideration of this award.  It was an honor to receive this award in 2018 and to be considered once again.  Listed above are what I consider some of my significant tournament successes.  I believe these successes, rankings, and ranking points do place me in an elite group of junior players. I owe much of this to the USTA and USTA Florida.  I chose to represent myself as a product of the USTA when many others chose to pursue the ITF juniors.  I believe that I represent players from brick and mortar schools where less school can be missed than participating in ITF tournaments.  I completed most of my high school requirements achieving an Advanced Certificate of Education through Cambridge University in 3 years before completing my high school education through Laurel Springs Private Online School during my 4th year.  I believe education is extremely important in tennis and life attaining a weighted GPA of 4.6.  Rising to the top allowed me to have opportunities to play college tennis at my choice of elite college programs, and ultimately sign with the University of North Carolina at Chapel Hill. I have a strong moral character regarding honesty and respect for my fellow competitors which are characters representative of the USTA.

How has participation in USTA Florida enriched your life?
I am lucky to live in Florida which is one of the best states for junior tennis.  I thought I was a pretty good local player, but discovered that I was average when playing in south Florida. I don’t believe I would have developed nearly as well in most other sections of the country.  I started playing USTA Florida at 10 and fell in love with the sport and competition.  My parents stressed integrity and academics so I had to work hard and perform well for them to allow me to miss school for tournaments.  I formed many great, lasting friendships through the entire USTA Florida system throughout the state.   I believe many of these will be life long relationships.  When I was invited to team events, I found that I really loved the this aspect of the game.  There was a lot of social development through competition, winning, and losing.  I suffered emotional highs and lows, just as we encounter throughout life.  I learned to work harder and my results improved.  Now the head of USTA Florida is located at the National Campus which is arguably the best tennis facility in the US.  I am inspired by the facility and play some of my best tennis there.

List the tennis awards you have received:
2018 USTA Male Junior Florida Player of the Year
January 2020 USTA National Campus Sportsman of the Year